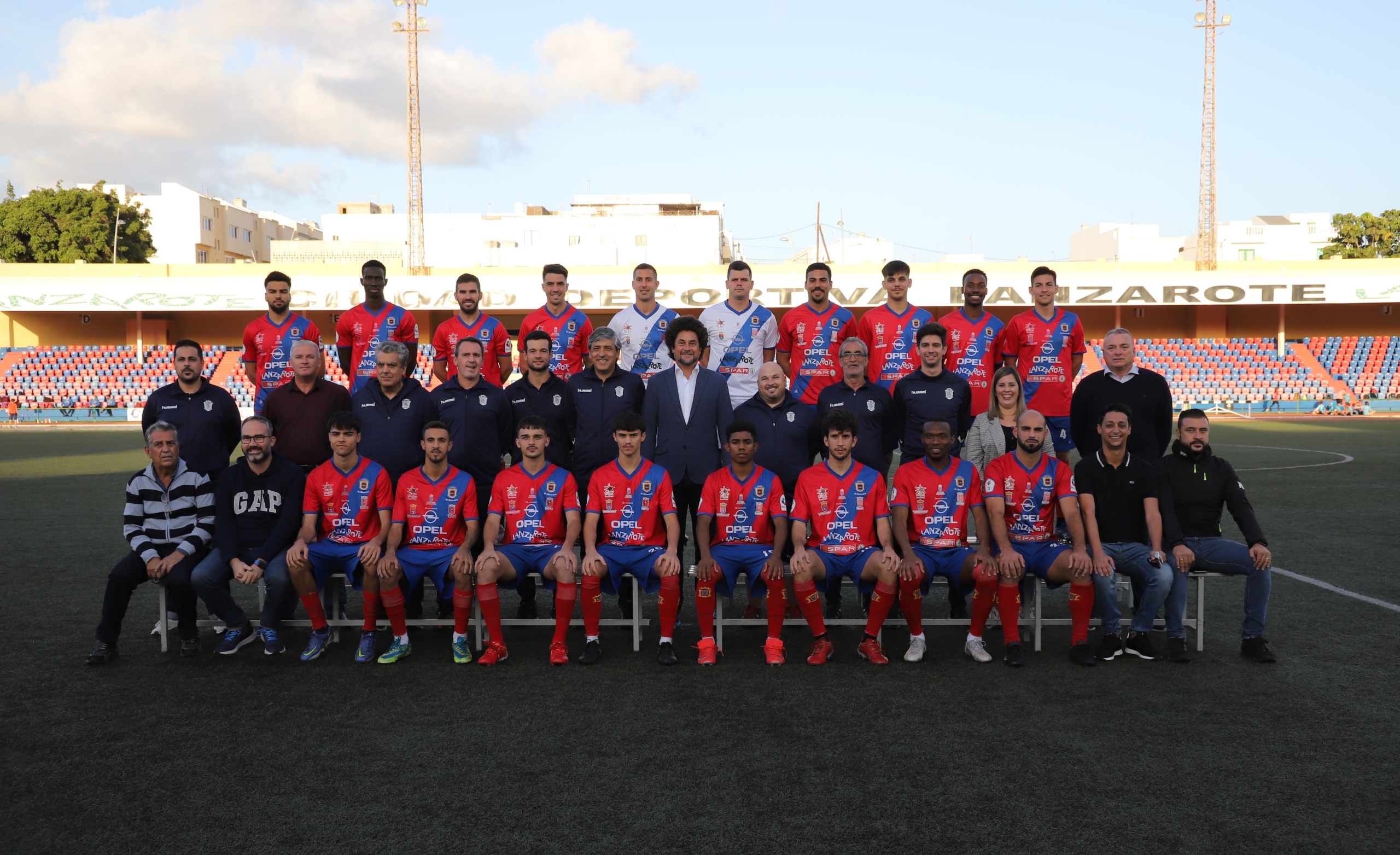 A 1-0 defeat against relegation rivals CD Buzanada on the 17th April left Lanzarote in the relegation positions and with two matches remaining they had to win both and still rely on the results of other sides.

A passionate 1-0 home win was followed by a 1-4 away win and Lanzarote had moved up to 9th spot in the 17 team league and had done everything that was possible. In most years one would have thought that this was safe but because of the restructuring of the league it was possible that seven teams instead of four could face relegation and only by finishing no lower than 11th would ensure safety.

Six sides have already been relegated which includes the bottom five and also second placed side UD Las Palmas C. Their B team has been relegated from the league above so they automatically drop a division as no club can have two teams in the same league.

The possible 7th club to be relegated is CD Buzanada. They will have an anxious wait hoping that the playoff semi-final winners of either CD Tenerife B or UD Villa Santa Brígida on the 15th May will beat a mainland side in the playoff final. If one of these teams is promoted then CD Buzanada will have a stay of execution and remain in the Tercera Division, if not they are relegated.

Lanzarote had already played their final league game so they could only sit and hope that out of four matches being played only two teams could leapfrog Lanzarote otherwise it would be a catastrophe.

It went down to the wire. CD Marino and UD Gran Tarajal won with ease so Lanzarote were in 11th and could not drop lower and everything depended on the other two matches. The news came through that CD Atlético Paso beat and relegated Fuerteventura side CD Herbania 0-1 to proclaim themselves Champions and claim the only automatic promotion position. CD Buzanada won their final match 3-1 but needed to win by four clear goals so are now in 12th spot awaiting the result of the playoff final. Most importantly Lanzarote were safe. 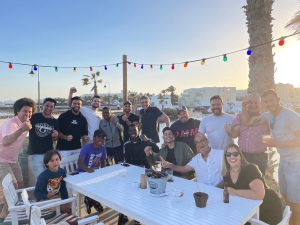 Celebrating survival in the Tercera Division.

HOW THE SEASON UNFOLDED

In the opening eight matches of the season the Rojillos were beaten only once and were up to 3rd spot, then on the 24th October they had one of their worst displays of the season losing in the final minute 0-1 at home in the important derby match versus U.S. Yaiza and in those following four matches could only pick up a single point and were down to 9th.

On the run up to Christmas and in the first match of the New Year the Rojillos beat league leaders UD Las Palmas C 1-0 picking up 11 points out of a possible 15 and were once again flying high in 4th position.

During the January transfer window the club knew that they needed to boost their fire power and brought in three strikers, Di Renzo, Traoré and Pacheco. Di Renzo scored on his debut against UD Gran Tarajal in a match Lanzarote dominated but the Fuerteventura levelled deep into injury time with just 10 men and the Rojillos dropped an easy two points.

Prior to this match Lanzarote´s most exciting player was the 19 year old Brazilian Alyson but he couldn’t play in that match due to a muscle strain. Everyone thought that he may be out for a couple of weeks but that was not to be the case. Coming in at only 5ft 4 inches (1.65m) and barely a featherweight, his pace was frightening and strength deceiving. This injury was to prove pivotal as the teenager was sidelined for three months. To make matters worse the exciting new winger Traoré picked up an injury a week later and played less than 60 minutes for the rest of the season. Never once did Alyson, Traoré and Di Renzo play together as was the plan. 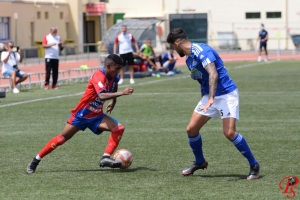 Alyson was out for the best part of 3 months and his return helped the club to avoid relegation.

Every club over the course of the season has injury problems but in all my years being involved with the Rojillos I had never seen it so bad. Defensively Lanzarote were outstanding but it was evident that the problem lay in front of goal.

Many fans of course were frustrated and manager Mateo García came in for some heavy criticism however he could only pick the players at his disposal. In one match he was forced to give three junior players their debut with a fourth junior already on the pitch having played his first match the previous week. Even though these young lads had the passion they were no match for any of the leagues experienced sides and Lanzarote could not score a goal for love nor money. 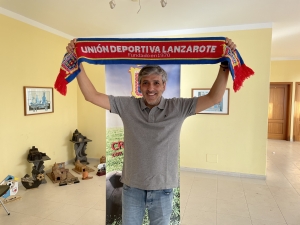 UD Lanzarote manager Mateo García came in for heavy criticism but his end of season gamble paid off.

The injury situation was also compounded with so many refereeing decisions going against the Rojillos. I may seem biased but anyone who has followed the club this season will understand that at no point during the campaign did Lanzarote gain any advantage from the officials.

This was epitomized during a home game against the future league Champions CD Atlético Paso. In a wonderful entertaining match Lanzarote scored and believed that they had taken the lead in the 77th minute. The referee and his assistant both pointed to the centre awarding the goal but following complaints from the visitors the referee, five and a half minutes later overturned his decision and cancelled the goal for offside. It was a bizarre call and totally blew away the myth that you can never change the referee’s mind.

In five games Lanzarote could only score two goals and with the defeat away to relegation rivals CD Buzanada the Rojillos were in dire trouble as they slipped into the bottom four with two games remaining.

Manager Mateo García gambled on playing Alyson and fellow striker Di Renzo who had been out for two weeks with a hamstring injury. The under fire Lanzarote managers gamble paid off with maximum points in those final two games as Lanzarote survived relegation on goal difference but also incredibly only four points adrift from the playoffs.

Brazilian defender Matheus deservedly won Player of the Season. The Lanzarote centre back along with the rest of the defence were superb throughout the season and only conceded 24 goals, the next best defence were the league Champions CD Atlético Paso with 27 goals against. 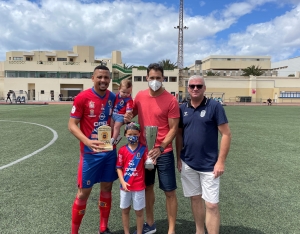 Matheus being presented with Player of the Season by club legend Rosmen and director David Timmons.

A bizarre season has come to an end but there is much work to do within the club. For two years the local authorities have imposed the toughest restrictions on Lanzarote compared to any other side in the league.

The club does not own the stadium and have to abide by the rules set from the authorities, this included not been able to open up our food and drinks canteen. The revenue including gate money lost from this was a battle the club should never have had, the club had tried everything in its power to remedy the situation but their pleas fell on deaf ears. Hopefully over the next couple of months a solution will be found.

The season normally begins in late August with the fixtures usually being released late July or early August.

In the next few days I will update how all the other teams within UD Lanzarote have fared this season. I hope that you all have a great summer.

The shop in Costa Teguise at CC Nautical, Local 25 remains open Monday to Friday 10am to 1pm and also on Wednesday at 5pm-7pm. The stall at the Teguise market is also there every Sunday between 10am to 2pm.

A FAREWELL TO THIS SEASONS CAMPAIGN