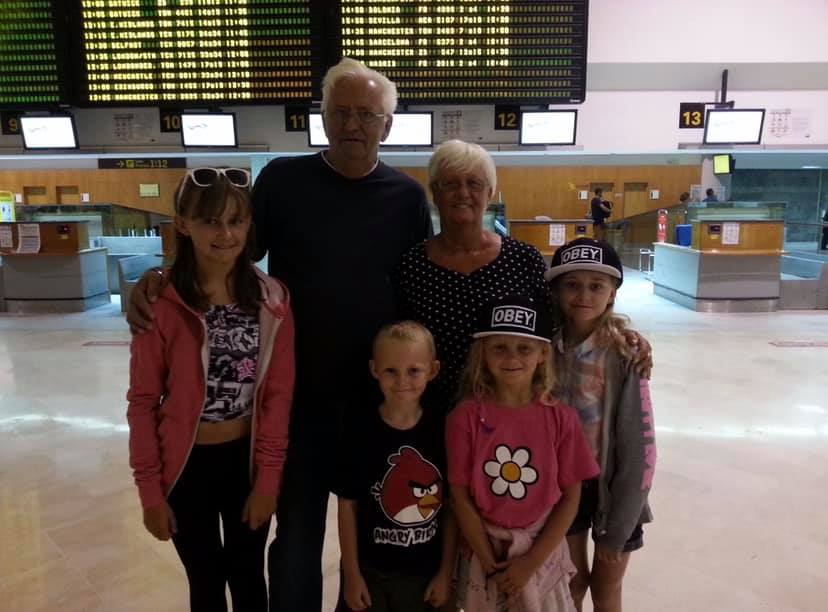 As many Rojillo fans will now know that it is with deep sadness that we have had to say goodbye to a wonderful man, friend as well as a committed Rojillo fan. John Holsten passed away on Friday 8th October in hospital in Las Palmas de Gran Canaria.

Many regular supporters of UD Lanzarote will remember John with great affection. My introduction to John was at his very first Lanzarote match many years ago and from that first day it was obvious that John was going to be a lifelong fan.

John had suffered a severe illness several years ago and after looking weak and frail he made an astonishing recovery and continued his journey watching the Rojillos both home and away. In fact John was the pioneer in many respects as at that time it was rare for fans to travel to away matches other than Fuerteventura.

A few weeks ago John and his wife Stella went to Fuerteventura for a short holiday. John was in the sea along with other people but he was facing the beach when a freak wave bundled the big man over. The power of that wave knocked John off his feet and he was sent tumbling into the sea bed.

Stella along with fellow tourists dragged him out of the sea but he began complaining about severe back and neck pain. On his journey in the ambulance to the hospital John suffered a heart attack and was immediately flown to the hospital in Las Palmas.

The doctors felt that John´s heart was doing well but scans revealed problems in his back and surgeons were forced to operate. Surgery went well however John could not wake up and things began to deteriorate. His daughter Donna, arrived from England to be with her parents and shortly after, John passed away peacefully at the age of 74 on the Friday afternoon.

John was also respected by many players and he had a close bond with ex Rojillos manager Adolfo Pérez and also ex player Fran Gil. His friends whom he sat with at the matches Jacci and Kevin made a kind gesture at Lanzarote´s home match on the 3rd October when they reserved his seat with a club shirt. 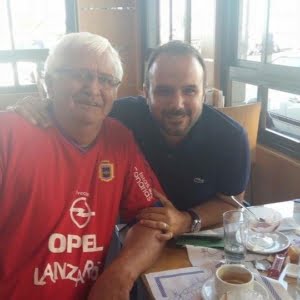 I will so miss chatting to John, we often sat next to each other on plane journeys to away matches and those flights seemed to take just a few minutes as we chattered from start to finish normally moaning in a fun way about something to do with football.

I know Stella would want to thank all the staff at the hospital in Las Palmas but a special thanks must go to a lady we never knew until after the injury happened. I had been speaking to Stella just after this accident occurred and had to think about what to advise as she was struggling with such a difficult task.

I asked for advice on a Gran Canarian Facebook page and a lady called Nicky Gordon responded. As Stella said herself Nicky is a star and she and her daughter Donna look set to be lifelong friends with this incredible person. Nicky acted as an interpreter, contacted the British embassy but above all was a rock that Stella had by her side during this terrible ordeal.

Incredibly Nicky boarded a flight to Lanzarote and surprised both Stella and Donna when she turned up at the funeral. On behalf of anyone that was or are friends with John, Stella or Donna we all want to thank Nicky from the bottom of our hearts.

John leaves behind his wife of 48 years Stella, his daughter and four grandchildren.

Goodbye Old Boy. It was an absolute pleasure!