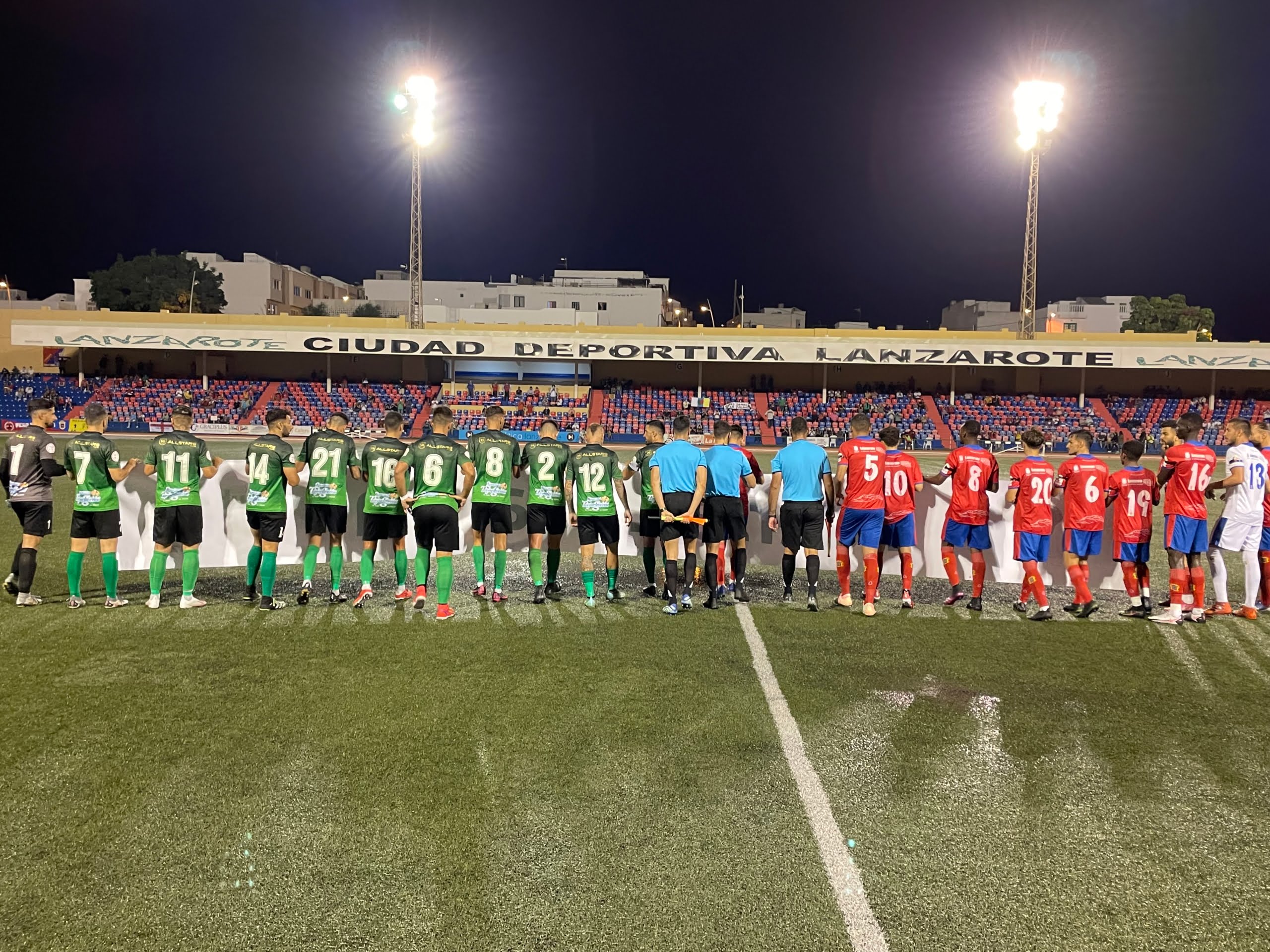 This match between two sides challenging for the top positions may have ended in stalemate however it certainly didn’t end without controversy. In the 77th minute the Rojillos were clearly awarded a goal but five minutes later with only the power of memory the officials changed their mind and cancelled out the strike. 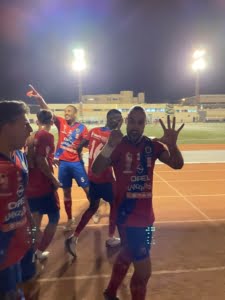 Rubo celebrating his goal that never was.

Prior to the match both sides united in the cause of the volcanic tragedy that has occurred in La Palma. The village of El Paso has been and are directly affected by these eruptions which are showing no signs of ending.

This game was always going to be tight. No side in the league have conceded less than Atlético Paso and only the league leaders UD Las Palmas C have scored more goals than Lanzarote. It did seem that one goal in this match could decide its fate.

The Rojillos began well but it did not take long for the visitors to find their rhythm and they began to boss the match. In the 32nd minute a beautifully whipped in corner was headed inches over by El Paso defender Carnevali.

In the final ten minutes of the half it was the home side that began to dominate and with two minutes remaining before the break the El Paso keeper made a mess of a punch and the ball dropped in the six yard box. Rojillos centre back Leo Marquez was the first to react but he wouldn’t have had the time to allow the ball to drop so he wrapped his foot around the ball in a semi overhead kick but his shot hit the underside of the bar then onto the post which was then cleared.

Lanzarote looked more positive in the opening stages of the second half and in the 55th minute the Rojillos super exciting Brazilian winger Alyson turned his defender inside out and struck powerfully from the edge of the box but the keeper did well turning the ball over the crossbar for and conceded nothing more than a corner kick.

Captain Ayoze Pérez entered the field midway through the second half and with that, the intensity from his side increased. In the 77th minute was when all the drama began. Ayoze struck at goal from the edge of the box, the linesman half raised his flag then dropped it instantly but the strike ricocheted off a defender and Lanzarote´s leading scorer Rubo pounced and took the ball wide of the keeper and slotted it home believing he had given his side a 1-0 lead. All I did was look at the linesman. He ran towards the halfway indicating a goal as did the referee.

The Atlético Paso bench were fuming leading to red cards for their manager and club delegate but their protests and dismissals were rewarded when after more than five minutes after the goal been scored the referee decided to annul the strike. Some fans who were more in line with play did think that there was a possible offside but many of those people didn’t realize that there had been a deflection.

It may well have been offside but nobody in that stadium had a better view of the situation than the linesman and he awarded the goal. The only way he could have changed his mind is to replay the incident in his mind and this will undoubtedly lead to doubt.

The game was not broadcast on television so we will never know the truth but one of the golden rules in football is that you cannot change the referees mind however with the actions of the bench from Atlético Paso, many Lanzarote supporters will now believe you can change their mind. The officials certainly did not cover themselves with glory.

The match eventually continued and one must credit the Lanzarote players for focusing on the remainder of the game. In the closing minutes the Rojillos had a fabulous opportunity to win the dual when Ayoze Pérez crossed low, sub Juanito controlled the ball well and his turn was exquisite but his strike from eight yards was blasted over the crossbar and there ended any hopes of winning the match.

Lanzarote must take to heart that after last season they were sitting bottom of the table having played seven matches and with just four points on the board, in this campaign after the same amount of games they have accumulated 12 points and are sitting in second spot.

On Sunday 17th October Lanzarote travel to Tenerife to face seventh placed side CD Tenerife B at 12 noon.