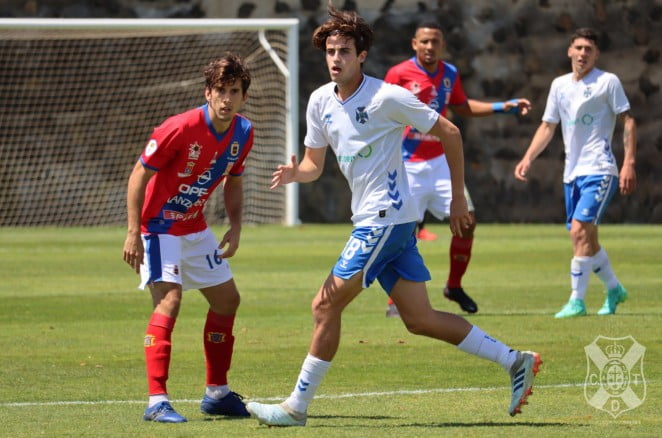 The Rojillos lose their final match of the season as their opponent’s progress to the next stage of a long, tough and complicated playoff system.

The home side began the stronger knowing that a win would guarantee them that their season wouldn’t end on this day.

Congratulations to these four, Jacqui, Steve and Kevin and Jacci who have been to many away games. They had to watch this one on a hill.

Early on the referee ordered a spot kick to Tenerife but Rojillos keeper Ruyman saved the strike for his second successive penalty save to keep the score level.

In the 25th minute the promotion chasing side took a 1-0 lead when Martinez tucked the ball home at the far post.

Lanzarote returned fire immediately with captain Rosmen playing in his final game struck a left foot shot but his effort hit the post and was cleared.

Lanzarote´s manager Josu Uribe must have inspired his players during his half time team talk as they came out and began to threaten the Tenerife goal.

Fans weren’t admitted to watch the match but supporters let the team know that they were there.

It was striker Giovanni early on who narrowly shot just wide of the goal and later on the two Miguel’s, Gopar and Gómez forced the Tenerife keeper into good saves to maintain his sides lead.

Unfortunately Lanzarote could not find a way through to end the season on a positive note as the B side of Tenerife kept their dreams alive of promotion.

Congratulations must go to Gran Canarian side PP. Pulido San Mateo who will join the already promoted side CD Mensajero in Segunda B next season (third tier) following their 1-2 away win against CD Atlético Paso.

There are still a host of teams that will battle to win that third and final promotion position and that will be decided over the coming weeks.

It will be with mixed emotions on how the management, players and supporters will review this season. The club has had to overcome many disadvantages and the general feeling will be one of relief that they will maintain their standing in this division.

Everyone involved in the club has remained positive and the understanding of the situation by the supporters has been incredible. One thing that is absolutely certain is that everyone is raring to go for the season ahead.