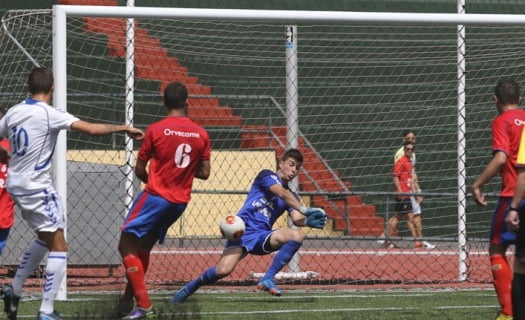 All will be decided next Sunday 31st May at 12 noon in Arrecife as the Rojillos held the Castiila-La Mancha side to a goalless draw in a tough and exhausting match.
Lanzarote must feel confident going into next week’s second leg, though if the visitors were to score then Lanzarote would need to equal that and better it by one to secure passage into the semi final of the playoffs.

The home side dominated the early exchanges with midfielder Pirri forcing the Lanzarote keeper Agoney to produce a good save.
The locals urged on by their 1200 supporters had the majority of possession in the opening stages however Lanzarote´s defence was organised and as the half progressed the Rojillos threat increased.
Deep into the first half Lanzarote had two good opportunities to open the scoring. A ball flashed across the goal line did not find a contact and secondly Rosmen tested the reflexes of the Manzanera goalkeeper but failed to find the net.

The hosts came out for the second period with the realization that they must take some advantage with them if they were going to return from Lanzarote in a week’s time with a little bit more than just a suntan.

The mainland side began to stretch the Lanzarote defence and in the 49th minute a great strike from distance by striker Raúl Castillo thundered off the Lanzarote woodwork.

The home team had dominated possession but were met with a resolute defence and with the Lanzarote captain Rosmen causing endless problems for the Manzanera back four with his physical presence it looked as though the visitors could have been the ones to snatch a winner.

In the final few minutes the home side fired several efforts but none tested the Lanzarote keeper. In the dying moments midfielder Pirri´s struck with force which the Lanzarote keeper thankfully palmed away to safety.
Lanzarote will be the happier but Rojillos manager Adolfo Pérez will know that his side are far from through to the next stage of the playoff process especially if Manzaneras were to open the scoring next week.

The game next Sunday has been confirmed for 12 noon. Season tickets are not valid for the playoff matches however the club has decided that season ticket holders will only be charged 3 Euros (show season ticket) whereas others will be charged the standard 5 Euros. As always children 15 years and under are admitted free of charge.