Neither side could find the net after than three and a half hours football so the match had to be decided on penalties. The visitors did not miss a strike whilst Echedey and the Lanzarote captain Rosmen failed to find the net and in front of nearly 3000 fans U.D. Lanzarote´s dream of returning back to Segunda B (League 1) football ended. 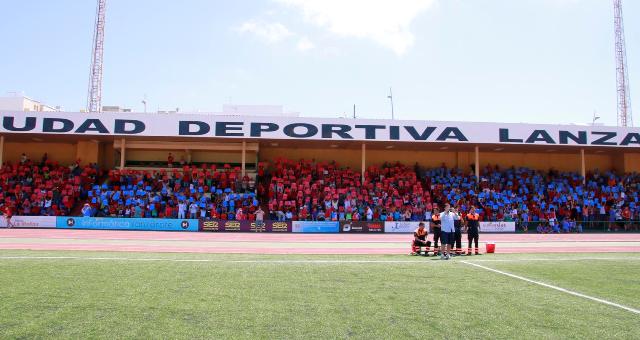 The last time the Rojillos were involved in a competitive penalty shoot out was way back in the 1999/00 season against Primera Liga side Getafe in the Copa Del Rey. The match ended 1-1 after 120 mins of football but it was the Madrid side that progressed to the next round.

Many locals were expecting a Lanzarote win but the team from the Castiila- La Mancha region of Spain have had a wonder season winning five of their last six league games whilst drawing the other. On the final day of the season they had to win their match and rely on other teams losing. Luck was on their side so they came into these two matches brimming with confidence. 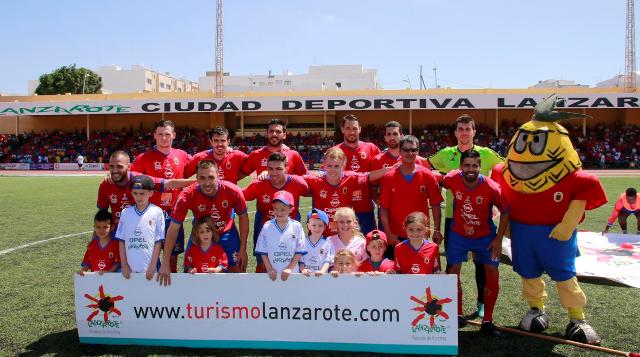 The first half was even with the visitors having the first strike at goal that flew high over the bar of goalkeeper Agoney. In the 25th minute a super surging run by Rosmen from the left wing completely undone the Manzanera defence and his low cross caused problems as goalkeeper Rodri could only get his fingertips to the ball leaving the ball exposed on the centre of the six yard box but unfortunately for Lanzarote it fell between strikers Mauri and Toñito and eventually was cleared to safety.

Shortly afterwards it was the mainland club who came close as striker Raúl Castillo struck low from 10 yards only to see his shot miss the post by a whisker.

As the sides went into the half time break with the game goalless the sun intensified and without a cloud in the sky temperatures easily topped 30 degrees.

Just six minutes into the second period and a free kick for the visitors was swept in from the right wing which found the head of defender Edu Olivares. From some distance his header powered off the woodwork to the relief of the Lanzarote supporters. From now on it was the Rojillos who dominated the match but were met with a superbly organised and hearty defence.

With 15 minutes remaining Rojillos right back Ángel stormed down the right wing and was taken out with a kick at head height for what seemed a clear penalty kick. To the shock and dismay of the majority of the supporters the referee waved play on. The abuse the official took for this decision remained till the end of the match.

Neither side could muster up a shot on target for the remaining 10 minutes so the game went into extra time with 15 minutes per half.

The players looked weary as they headed back out into that roasting sun. All of the play was dominated by Lanzarote with left winger Toñito being the main source of concern for the visitors as he weaved and dodged his way through the defence but the two Manzanera centre backs were inspired clearing the danger.

In the 117th minute Ángel was shown his second yellow card by the clumsy official. If you have read my reports over the season it is rare I have criticized any official but on this occasion the referee was just not on the same wavelength. It seemed as though the ref Señor Carrasco had never kicked a ball in his life. The Lanzarote vice captain was awarded a free kick with three minutes remaining and chose to take it quick but this poor official from Madrid for the second time in the match brought play back but on this occasion branded Ángel his second yellow so the Lanzarote right back was ordered off. If the ref was not up with play that is fine but to prevent a player to stop quick thinking especially so late on is unacceptable. 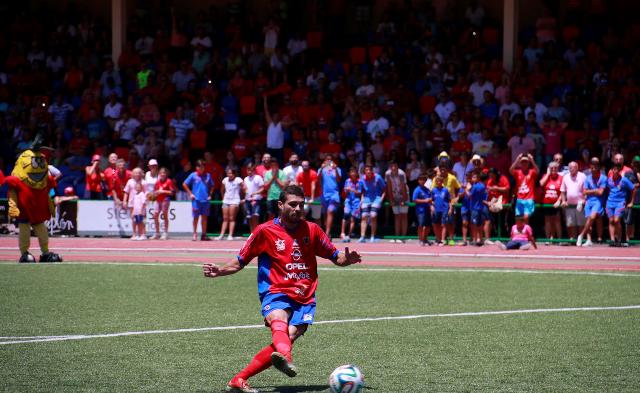 The game would be decided on penalty kicks. Marcos Cabrera was the first and sent Lanzarote 1-0 up. The visitors looked as though they had practised these kicks as they were confident and each kick was thumped in a corner giving the Lanzarote keeper no chance. Echedey took Lanzarote´s second and he will be disappointed as it was hit in the corner but the keeper could have walked and picked it up. Yaco kept Lanzarote in with a shout converting his kick but the Manzanera keeper blasted his home so now it was down to Rosmen to keep Lanzarote in the game but his weak effort was easily saved by the keeper and CF Manzanera find themselves in the semi final of the playoffs for the right to play in Spain’s bronze league. Good luck!

Condolences to Brad, Ian and all their family.
Scroll to top