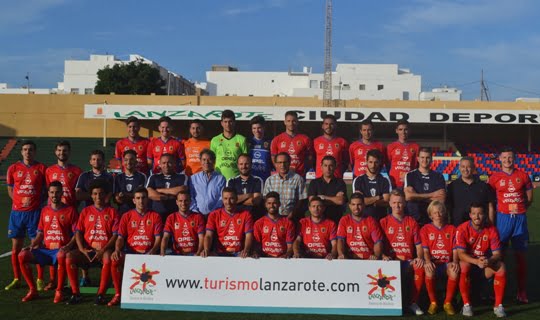 The Rojillos needed a single point to guarantee themselves a second position finish otherwise it was up to our neighbours Yaiza to get any sort of result against third placed side C.D. Marino.

As it panned out it was Yaiza that won 4-0 ensuring Lanzarote finish the season in second spot which not only sees Lanzarote playing a mainland side who finished fourth but also it does have the added advantage of the second leg being played at home.

Lanzarote started the better of the two sides and were unlucky not to take the lead in the opening minutes as British boy Brad Cockerill had a great effort superbly saved by the Tenerife keeper.

Seconds before the half time whistle Lanzarote were level when Colombian Mauri won the ball and forced his way into the penalty box then squeezed his shot wide of the keeper sending his side into the half time break with the score 1-1.

The home side began the second half on the front foot and on the hour mark a free kick was flown into the Lanzarote danger area which found Tenerife defender Juanmi unmarked and the centre back made no mistake with his header to put his side back in the lead at 2-1.

Lanzarote dominated the final half hour of the match and had a host of chances to seal a point but however hard they tried the ball seemed shy of the net.

As it happens it didn’t matter as Yaiza recorded their biggest victory of the season which put a huge smile on all involved with U.D. Lanzarote.

The playoffs begin next week 24th May with Lanzarote away in the Ciudad Real region of Spain 150km south of Madrid and face CF Manzaneras. Our opponents to be have had a superb ending to the season winning five and drawing one in their final six matches. On the final day of the season a 5-0 home win clinched the final playoff spot for the Castilla-La Mancha side.

The return leg will be on the weekend of 30/31st May at a time and date waiting to be confirmed.