The Rojillos end their home campaign unbeaten all season having won thirteen and drawn six following this win against a young and talented Tenerife B side.

CD Mensajero are deservedly champions and have done it with a game remaining after easing to a 3-0 home win versus UD Telde. Third placed side CD Marino slipped up at home drawing 3-3 which means Lanzarote need one point in their final match to guarantee second spot.

Second position is hugely important as Lanzarote will play a lower placed side in the first playoff, it also means that the first match will be away and a week later the return leg will be played at the Arrecife fortress.

Both Lanzarote and CD Marino are away in the final match of the season with the Rojillos travelling to Tenerife to face mid table side UD Ibarra with a three point advantage. CD Marino are visiting Lanzarote to take on U.S. Yaiza. If Yaiza do not get beaten then Lanzarote are assured of second spot. Goal difference favours CD Marino so as the game kicks off at the same time the Rojillos must at least get a point otherwise they are relying on their neighbours.

It has now been over a year since Adolfo Pérez´s men have tasted defeat at home so if you fancy supporting Yaiza next week all will be forgiven.

U.D. Lanzarote got off to a dream start, seconds into the second minute and Raúl whipped in a cross from the right flank and Rosmen got in between the two central defenders and his superb guided header flew into the bottom right hand corner. The 1-0 lead calmed the nerves of the Lanzarote players and paved the way for an entertaining first half in scorching heat.

It certainly wasn’t one way traffic as this young Tenerife side some of whom have played for the first team were comfortable in possession and dangerous on the break.

Man of the match had to go to Tenerife number 10 as he terrorized both left and right backs. It doesn’t come as much of a surprise that this young lad Cristo González is one of those players who has appeared in the Tenerife first team in Segunda A (Championship).

He was involved in everything that was be thrown at the Rojillos and in the 18th minute a narrow offside decision prevented Tenerife from levelling but just a minute later and winger Toñito picked up the ball on the edge of the area, he turned his defender and placed a beautiful curling chip with his left foot beyond the Tenerife keeper and into the top corner giving Lanzarote breathing space with the 2-0 advantage. 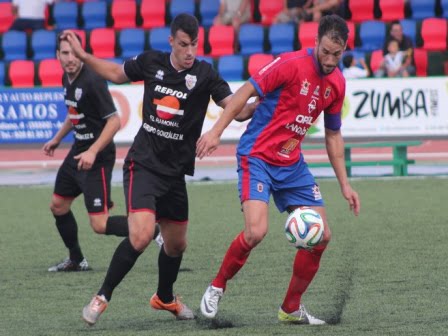 The game was now end to end with Rosmen having an effort ruled out for another narrow offside decision and then that Tenerife number 10 chased to the by-line and fired in a bullet of a cross which hit the stomach and winded Lanzarote´s central defender Francis Hernández but thankfully the ball was picked up on the line by keeper Agoney.

After such a furious pace played in hot conditions it wasn’t surprising that the game began to slow down and as both sides headed into the half time break with temperatures exceeding 30 degrees, a cold shower and replacing fluids was immediately on the agenda.

One did feel that Lanzarote would sit back on their lead and try and catch the visitors on the break and this proved to be the case. However in the opening stages of the second half Lanzarote controlled possession but as the clock ticked by the urgency, youth and fitness of the young Tenerife players became apparent as they surged forward.

The wonder winger Cristo González put the Tenerife side right back into the game in the 76th minute as he fired in a thunderbolt of a shot from 20 yards that flew into the top right hand corner.

Poised at 2-1 Tenerife came at Lanzarote and in the 84th minute a good save from Agoney prevented that number 10 levelling the match. A minute later Colombian Mauri who had fought like a tiger all day saw his effort fire off the woodwork for the home side but nevertheless Lanzarote deserved their victory.

Next Sunday just a point is needed or for Yaiza to take anything off CD Marino and this will guarantee Lanzarote the second leg of the play off tie to be played at home.

The Spanish football strike does affect teams in the Tercera Division so we will have to see if it is resolved. I am sure it will be.