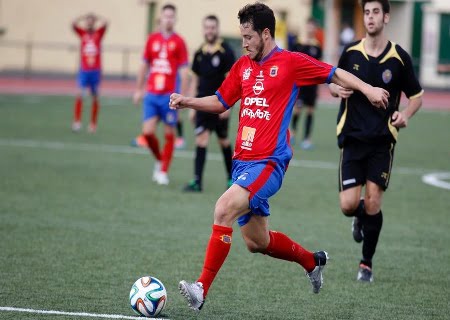 There may have been rain but as far as UD Lanzarote were concerned the weekend couldn’t have been better. On Saturday, first placed team CD Marino lost whilst second placed side CD Mensajero drew. Lanzarote then came from behind on the Sunday to claim all three points and move within two points of top spot. A red hot weekend!

At the start of play it was third placed Lanzarote versus third from bottom CD Vera. The Tenerife side certainly did not look like a team who were struggling at the foot of the table as they made the Rojillos work extremely hard for their victory.

Neither side looked comfortable in the early stages but it was the Rojillos who were the first to threaten. A strike from winger Toñito was saved by the keeper and Rosmen nodded home the rebound only for the official on the far side to wave his yellow flag for offside and the goal was anulled.

In the 19th minute the visitors finally woke Lanzarote up. A cross from the right was whipped in with pace and midfielder Sergio Pérez met the ball with a powerful header which gave the Lanzarote keeper Agoney no chance and gave the Tenerife side a surprise 0-1 lead.

The Rojillos reacted well with much better and quicker passing. It took just eight minutes for the hosts to be back on level terms. From a free kick centre back Falo sent the ball back across the area and the Tenerife sides defence remained static as striker Yaco poked the ball home to make it 1-1.

Just after this a few drops of rain appeared and about 20 seconds later it was torrential and puddles formed all over the synthetic grass.

On the half hour British boy Brad Cockerill forced a great save by the keeper from a header and seven minutes later his fellow British colleague Louis Kennedy thought that he had given his side the lead when he forced the ball home only for that man on the far side to wave his yellow flag once more and rule out the goal for offside.

The home side now looked in control but could only go into the half time break on level terms.

The visitors who are four points off safety and are a club who have been traditionally very good in this league came out fighting and didn’t allow Lanzarote a second on the ball.

The Rojillos knew to be patient and with all five of their leading scorers on the pitch it was only going to be a matter of time until a chance came their way.

In the 72nd minute defender Raúl who packs a lethal strike volleyed a great effort only to see the Vera keeper produce an excellent save. This was to prove a sighter for the Lanzarote centre back.

Lanzarote were now pressing forward and in the 81st minute a strike from sub Echedey took a deflection and fell into the path of Raúl who instantly wrapped his foot over the ball in a volley and before the keeper could move the ball had nestled into the bottom right hand corner to give his side an incredibly important goal.

The Rojillos now tried to kill off the game. Moments after the goal the powerful number 10 Mauri skipped past three defenders and sent a delightful chip over the keeper but the ball didn’t come down quick enough as it bounced on the bar and away for a goal kick.

In stoppage time the Tenerife playmaker Alexis de Paz who may have a larger than normal frame for a footballer but without a doubt has the ability to play at this level teed up a free kick 25 yards out.

The midfielder fired in a fierce shot but fortunately the Lanzarote keeper positioned himself well to tip the ball over the bar for a corner.

The Rojillos after five matches without a win but with just a single loss had now won and even after this poor run they find themselves just two points off the league leaders. They are still well and truly in the mix for top spot with eight games to play.

Next week the Rojillos travel to Tenerife to face relegation threatened Las Zocas which is followed by a home match on Thursday 2nd April. Kick off time is not confirmed but is likely to be in the evening. The club urge all fans to come out in force because if Lanzarote maintain their superb unbeaten home form there is a great chance that the Rojillos will qualify for the Copa Del Rey next season by becoming Champions.