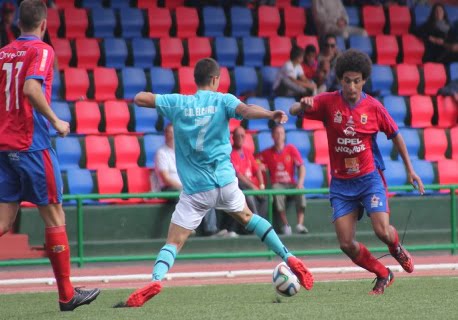 The Rojillos suffer their first defeat in eight matches as the La Palma side claim second spot solely for themselves on a day where the Rojillos also suffer their biggest defeat of the season.

At the beginning of the day both sides shared second position in the league table and it was just a single goal separating the two sides. By the end of the day CD Mensajero own second spot whilst Lanzarote slip to third place and five points off league leaders CD Marino.

The leagues in form side extend their unbeaten run to eight games taking 18 points out of a possible 24 and are now just two points off top spot.

Lanzarote began the game well and looked the more threatening attacking on either wing. Just four minutes in and Kilian dribbled passed several players then struck well but his effort was saved by the La Palma keeper and a corner was the result.

The Lanzarote keeper Agoney who had just served a four game ban was immediately called into action pulling off a good save from striker Iray Barreto´s headed effort.

The Rojillos who were without their captain Rosmen as he serves a one match ban following his five yellow cards and 20 minutes into the match also lost their hugely experienced midfielder Marcos Cabrera as he pulled up with injury. Manager Adolfo Pérez brought on Echedey as a replacement and was forced to make a few tactical changes.

Deep into stoppage time at the end of the first half and the home side took the lead. A cross from Juanda was met by Iray Barreto and he fired past the helpless Lanzarote keeper to give his side a 1-0 advantage to take into the break.

Ten minutes into the second period and Lanzarote came close to levelling when Colombian striker Mauri saw his effort fly inches over the upright.

Four minutes later and the La Palma side doubled their lead with a fantastic free kick. From 25 yards striker Yeray Pérez wrapped his left foot around the ball giving it curl, power and dip. Goalkeeper Agoney was at full stretch but in all honesty got nowhere near the ball as it nestled into the top right hand corner of the net. Deservedly the goal scorer was mobbed by his team mates and the bench.

The home side were now in full control and finished off Lanzarote in the 82nd minute. A poor defensive clearance let in another striker Dani López and he made no mistake making it 3-0.

Next Sunday 22nd March at 12 noon Lanzarote are at home against Tenerife side CD Vera who are fighting for their lives in the last relegation spot. Despite winning last week the Tenerife side are still four points from safety.