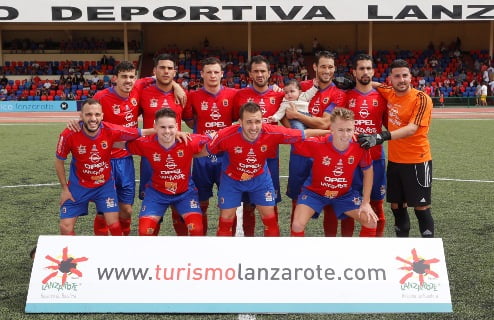 For the second consecutive away game the Rojillos equal their heaviest defeat of the season but remain in third spot four points behind new league leaders CD Mensajero.

The Rojillos away form has not been good over the last few weeks so you can expect this report to be cut short so I can spend more time organising a bus, ferry trip over to Fuerteventura for Lanzarote´s next away trip on Sunday April 12th.

Both sides had good chances on what was an equal and entertaining first half which ended goalless.

The Tenerife side went in front in the 56th minute and 15 minutes later Rojillos striker Mauri picked up his second yellow card and Lanzarote were reduced to ten men.

Just a few minutes later and the home side took advantage of the numerical difference to make it 2-0. Louis Kennedy almost pulled one back but his effort came crashing back off the crossbar.

Deep into stoppage time the home side put salt into the visitors wounds as they added a third.

This Thursday 2nd April Lanzarote are at home to fourth placed side Real Sporting San José at 12 noon. This is “The day of the season ticket holder”. Anyone who has a season ticket is welcome to bring along a guest who will have free entrance. There are probably special offers on at the bar as well.