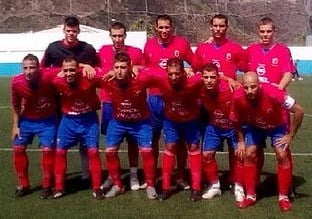 U.D. Lanzarote kicked off their Season with a thrilling away win in the blistering heat of Tenerife finding the winner deep into injury time.

Lanzarote began the match similar to last week allowing their opponents to get the better of the opening stages. The Majoreros (Fuerteventurians) did not capitalize on their early dominance with striker Dino failing with two good chances.

By the quarter hour mark the Rojillos had picked up the pace of the game and were clearly in charge in the centre.

A strike from 20 yards from Centre back Adrián narrowly flew past the Corralejo keeper’s left hand post. In the 23rd minute good work from Rosmen and Ayoze troubled the Fuerteventura defence with the latter pulling back the ball across the face of goal only to see the danger momentarily cleared by the defence.

On the next assault the Rojillos claimed their first home goal of the campaign through the unlikely source of defender Ángel Gil. Again, good work from Ayoze who found striker Echedey and his effort from six yards rebounded off the keepers legs and Ángel kept his nerve and blasted the ball low and into the far corner and in doing so equaled his last seasons goal scoring tally.

In the 32nd minute midfielder Jotha fed a lovely ball through the centre for the impressive Toñito to chase. The temperamental winger who incredibly has gone two whole games without a card beat keeper Jero to the ball by a toe but his effort flew back off the keepers outstretched leg and away to safety.

Just before the break a long range dipping free kick from Ayoze was inches away from doubling his sides lead.