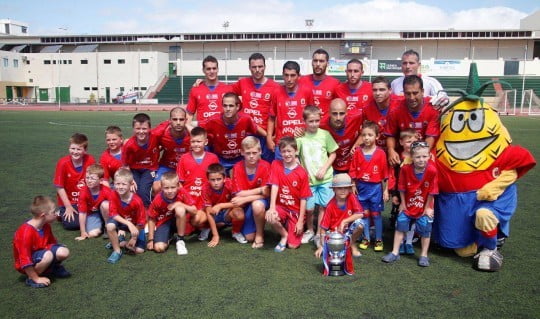 Apologies for the late start to the season. All information such as fixtures, reports will be updated shortly. Please go onto Lanzarote football club on Facebook where instant information will be available. The season is well under way and U.D. Lanzarote have drawn their opening two league matches and have also been involved in the Copa Del Rey.

First up was the Fuerteventura side Corralejo which ended in an entertaining goalless draw played in intense heat then it was a trip to Gran Canaria to face fellow league favourites Las Palmas B. The home side went in front early in the second half but striker Echedey levelled the scores in the 72nd minute earning the Rojillos a fine away point.

This season Lanzarote have qualified for the Copa Del Rey (F.A.Cup). In Spain the only teams who automatic qualify for the Copa Del Rey are Primera (Premiership) and Segunda A (Championship) clubs as well as the top five from each league of Segunda B (League 1) and the Champions of the Tercera Divisions (fourth tier), Lanzarote thus qualified as Champions of the Canarian Tercera Division. This is a competition where Lanzarote have had remarkable success over the years with wins and narrow losses against some of Spain’s finest teams.

The draw for the first two rounds took place early August and the Rojillos had lots of luck, all of which was bad. In the first round they were drawn away against the Champions of the Tercera Division in Madrid; Alcobendas Sport. Should the Rojillos win that then they would again be playing away in the second round against either Segunda B clubs Burgos C.F. or Eibar, certainly not an ideal draw.

As ever, in all the Cup matches i have seen Lanzarote involved with over the years no one gave them any hope. The first match was played on the 31st August. Alcobendas Sport were in buoyant mood having gone top of their division at the weekend with a thumping 5-0 win but Lanzarote humbled the Madrid outfit stealing victory (0-1) through winger Toñito in the 72nd minute.

Eibar beat C.F. Burgos, therefore next Wednesday Lanzarote once again travel to the top north of Spain as the underdogs. Only a few seasons ago Eibar just missed out on an automatic promotion to the Primera Liga and also was a whisker away of gaining promotion in the play offs. The game will be settled in Eibar and should Lanzarote pull off another great result then the Rojillos would be in the draw for the third round with the Barcelona´s and Real Madrid´s of this world.