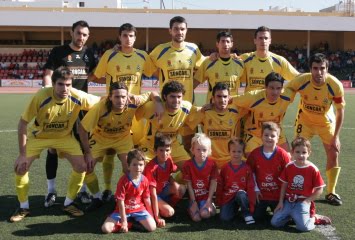 U.D. Lanzarote fought back from a goal down against the league leaders and giant killers of Real Madrid in the Cup to earn a valuable point in a highly charged and entertaining encounter on a hot Sunday morning in Arrecife.

The Conejeros (locals) began the match looking the more offensive of the two teams. In the 6th minute neat footwork from Rubén Rodriguez set up striker Rosmen. The tall centre forward struck the ball well from eight yards but his shot rose a foot too high over the bar.

Strikes from Rubén Rodriguez and a long distance effort from Jotha came close but a shot from midfielder Cascón for the visitors came closest, hitting the woodwork.

Lanzarote are now top of the form table over their last eight games played, underlining their intention of avoiding relegation.

Lanzarote got off to a flyer. The moment the Ref blew his whistle Lanzarote looked determined to go in front. After only five minutes Rúben Rodriguez whipped in one of his special left footed corner kicks and right back Moncho flicked on and new boy Carlitos stuck the ball home giving the Rojillos a shock 0-1 lead.

The game plan for the home side went up in smoke as Lanzarote did not relent and were first to every tackle giving the fourth placed side no time on the ball.

In the 19th minute another superb cross from Rúben Rodriguez was met by Ayoze Pérez and from the centre of the area he drilled Lanzarote into a 0-2 lead.

The Rojillos battled for every ball and did not let their opposition any time to settle. The home side could only offer a long distance shot through midfielder Indiano which flew over and a strike from centre forward Perea which was comfortably dealt with by the Lanzarote keeper Vilches. The Rojillos looked good value going in for their half time cuppa with a two goal advantage.

Only 10 minutes into the second half and the home side reduced the deficit. A cross floated in from defender Regalón fell to Javi Cantera and the midfielder made no mistake blasting home giving his side plenty of time to go in search of an equalizer.

Instead of heads dropping, this setback only inspired the eleven men of Carmelo Hernández who went in search of a third goal. The game was being played at a frantic pace and only a goal line clearance prevented Jonathon Torres from restoring the two goal cushion.

In the 79th minute centre back Faruk picked up his second yellow card and Lanzarote were forced to play the final ten minutes or so with only 10 men. Lanzarote immediately brought on their eighth and last signing of the January transfer window, defender André Luiz.

The expected bombardment from Atlético arrived as they launched ball after ball into Lanzarote´s danger zone. The Rojillos defence stood firm and in the closing minutes a brilliant block by Rojillos keeper Vilches ensured that Lanzarote travelled home from Madrid with their first victory this season in the Spanish mainland.

Lanzarote have now moved off bottom spot which they have occupied since the 11th October albeit by only one place. Next week Real Racing Santander B will be the visitors and their recent form is terrible with no wins in nine games and  are only three points ahead of the Rojillos sitting in the relegation play off position with a third division club. This is a true six pointer.