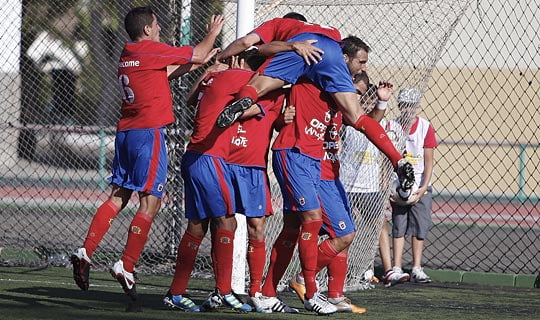 UD Lanzarote completed their third win on the bounce and their sixth consecutive home win, nevertheless with other teams also fighting for a playoff spot and winning, the Rojillos remain four points adrift of the all important fourth spot.

Over recent weeks Lanzarote´s home matches have been packed with entertainment but on this occasion the Tenerife side packed the defence and the Rojillos had to be content with the majority of possession though finding it difficult to create goal scoring opportunities.

Surprisingly the visitors began the game with a spring in their step as they forced the home side into a succession of corners though it wasn’t long until the Rojillos took control of the match against the leagues bottom side.

The opening goal came in the 25th minute. Good work from the over lapping left back Taja fed last week’s hero Gustavo. From a narrow angle the midfielder blasted at goal only to see his shot rebound off the Tenerife goalkeeper and fall into the path of Rosmen. The hardworking striker managed to wrap his foot over the ball and blast into the vacant net from five yards.

Lanzarote began to find their rhythm but were thwarted by a stubborn Charco defence. The visitors only effort of the first half came late on as front man Oscar Torres fired narrowly over the bar from the edge of the box but the score remained 1-0 to Lanzarote at the break.

The visitors look doomed to relegation with an eleven point drift to safety but gave a good account of themselves in the early stages of the second period. A cross from the right from the visitors was only half cleared by the Rojillo defence and from the edge of the area midfielder Airam rocketed in a goal bound strike but the Lanzarote keeper Ruymán brilliantly dived low to his right turning the ball away for a corner.

The Rojillos had been warned and gradually stepped up a gear with midfielder Vladi in fine form fighting for every ball and showing why he has played football at higher levels.

With ten minutes remaining Lanzarote finally took the sting out of the Tenerife side’s tail. Action hungry Toñito picked the ball up on the left wing and bamboozled his defender by turning one way then another. He finally cut inside and planted his shot beautifully passed the outstretched keeper into the far right hand corner to give his side breathing space with a 2-0 lead.

The Tenerife side were exhausted and couldn’t offer any more fight after putting so much effort into the match. In reality Lanzarote never looked in any difficulty and were comfortable winners.

Lanzarote have leapfrogged Tenerife B as they were defeated in La Palma by lowly U.D. Tijarafe and sit in seventh spot. Next week the Rojillos travel to Tenerife to play against Las Zocas. Hopefully the Tenerife side will continue their downer as they have lost their last three matches.