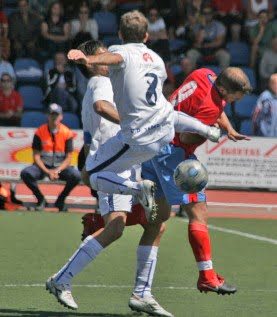 The Rojillos fight back from 1-2 down with 10 men to draw level in the final minute of play with a penalty converted by Lanzarote´s top scorer Rubén Rodriguez.

The opening stages of the game did not flow well with the Referee stopping and starting the game with unnecessary free kicks being awarded to both sides. The Conejeros (locals) then began to start enjoying the majority of the ball and in the 9th minute the home side took the lead. A free kick swung into the six yard box from Rubén was chased by Carlitos, without touching the ball his run deceived both defence and goalkeeper and the ball ended up in the bottom left hand corner giving Lanzarote a fortunate 1-0 lead.

The Rojillos were now looking to increase their lead. In the 25th minute an inch perfect through ball from Jotha found Carlitos but the striker got the ball stuck under his feet and he was crowded out of the way by a host of Tenerife defenders. A minute later and a 20 yard effort from left back Juachi looked destined for the top left hand corner but the Tenerife keeper acrobatically dived and brilliantly saved with his right hand and only conceded a corner kick.

The Tenerife manager was not happy with what he was seeing and on the half hour he ordered two of his subs Airam the leagues top scorer, and ex- Rojillo Oscar Martin to warm up. This seemed to do the trick as the Primera Liga´s B side gradually edged back into the game and went into the half time break trailing by a single goal.

One minute into the second half and Tenerife made the move of the match by introducing the ex Lanzarote favourite Oscar Martin and the leagues top scorer with 24 goals Airam. Oscar Martin immediately was causing problems flying down the right wing leaving the Lanzarote defence in pieces.

Lanzarote drop a place and are now third from bottom. Next week Lanzarote will travel to Badajoz and face Cerro Reyes who look comfortable in 13th place but are still only three points ahead of Lanzarote. This emphasizes how close things are in the relegation zone with only three points separating six teams.

The home side began the game knowing that a victory here would go a long way ensuring another season in Spain’s third league of football. The Badajoz side were quick off the blocks and were intent on calming their nerves by scoring an early goal.

The Rojillos realized that this was going to be the case and were defensively very well organized in the opening few minutes and gradually began to gain control of the ball in the centre of midfield.

Just when Lanzarote had thought they had contained the opening barrage of attack from the home team they were victim to a moment of brilliance in the ninth minute of play. A great run from winger Golo down the right flank caused mayhem within the Lanazarote defence. The winger delivered a superb pinpoint cross to the far post and striker Engo Noir finished off the move with a textbook header which beat the Rojillos keeper Vilches giving the home side a 1-0 advantage.

Lanzarote kept their discipline and edged their way back into the match. Six minutes from half time and with the help of the Cerro Reyes keeper Lanzarote were level. A corner from Raúl Torres was caught by the keeper but for some inexplicable reason the ball slipped from his hands and the Lanzarote striker Jonathon Torres couldn’t believe his luck toe poking the ball home to make the score 1-1.

For the remainder of the first half Lanzarote got to grips with the game and looked the more dangerous side but still couldn’t capitalize. In the 41st minute a 20 yard effort from the goal scorer Torres was scrambled away by the nervous keeper as the home side held on till the break.

After the interval the home side gradually began to pour pressure restricting Lanzarote to counter attacks. In the 66th minute Lanzarote defender Moncho cleared off the line following a shot by midfielder Cayado. Cerro Reyes then replaced their left and right midfielders with two wingers, one on either flank.

The Rojillos began to sit back and were looking more than content with a point. In the 80th minute sub Cristo was clean through with just Vilches to beat but his effort cleared the upright and Lanzarote drew a sigh of relief.

The relief was only temporary. With four minutes remaining a cross from Cristo found fellow sub Juanito, he passed the ball backwards to the unmarked Engo Noir and the striker made no mistake thundering the ball into the net from eight yards and putting his side 2-1 up with his second goal of the match.

The home side held on for the remaining four minutes of mandatory time and the three minutes of injury time for a deserved victory.

On a good note, none of the other sides in the relegation battle won and just six points separates the bottom seven teams with eight matches to play. Four teams will be automatically relegated and the fifth from bottom side will be forced to face a play off match with a third division club in order remain in this league.

This Sunday Lanzarote host Puertollano who will be bubbling with confidence following their 3-1 win against second placed side Real Oviedo.

The side from the Castilla- La Mancha region of Spain will be eager to improve on their good form which has brought them to within four points of the promotion places.

Lanzarote on the other hand must maintain their fantastic recent home form in which over their last seven home games the Rojillos have won five and drawn two.