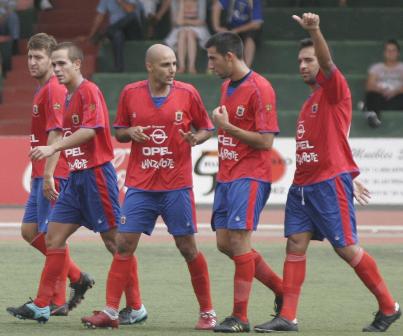 Two late goals see the Rojillos return to winning ways and go two points clear at the top of the league.

The Rojillos began the game half asleep and were fortunate in the first minute that they did not go a goal down. Midfielder Carlos Tutu fired in a cross come shot only to see his effort rebound off the foot of the post with a team mate inches away from a tap in.

Lanzarote slowly got themselves back into the game and it didn’t take long to reap rewards. In the 20th minute Javi Betancourt blasted in a low and hard strike from just inside the box which travelled under the keeper to give his side a 0-1 lead.

The La Palma side steadied the ship and held the majority of possession but rarely threatened the Lanzarote keeper. Each time the Rojillos won the ball they looked dangerous and should have extended their advantage.

As it was, two minutes before the break and the home side leveled. A cross from Alexander from the left wing was completely missed by the experienced Jotha which left the Lanzarote keeper flat footed as the ball rolled inside the far post.

Four minutes into the second half and the La Palma goal scorer Alexander, luck ran out. He picked up his second yellow and was ordered off the field by the official. Tackles then began flying in and both sets of players were warned to calm down by the Ref.

Mid way through the second half and Jonathan Torres headed in his first goal of the season to regain the lead for the Rojillos. Torres has had a couple of niggling injuries this season and hasn’t been as sharp as normal. Following a good substitute display last week the Rojillos star striker was rewarded with a start in the initial eleven and proved his undoubted ability to manager Quico De Diego.

In the 89th minute Lanzarote sealed all three points. A great ball by Rosman found sub Yaco and with the goal at his mercy easily beat the Victoria keeper to end the game comfortably at 1-3.

Next week, Tenerife side Atlético Granadilla will be the visitors. Their goalkeeper, Marino, will be familiar with most of the Lanzarote players and backroom staff following his 12 years he spent wearing a Rojillo shirt.