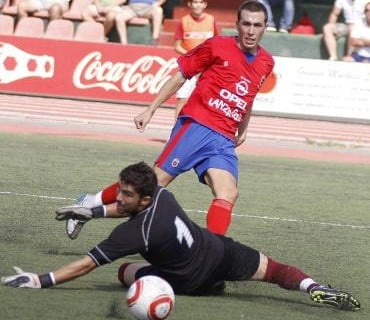 U.D. Lanzarote extend their lead at the top to four points following a home victory and with their nearest rivals Las Palmas B slipping up with an away defeat.

The opening quarter of an hour the Gran Canarian side totally dominated possession but offered little threat in the Rojillo danger area.

It wasn’t until the 19th minute that Lanzarote had their first sight of goal. A quickly taken free kick set Toñito on his way and in the space of seconds he had two strikes at the target. His first was saved from inside the area and his second effort headed towards space.

Four minutes later and Ayoze over hit a pass in the area to striker Rosmen who looked destined for a tap in. The home bench celebrated Lanzarote´s mishap as though they had scored themselves.

Lanzarote now looked threatening but good chances for Ayoze and another two from Toñito went beckoning then in the 42nd minute the Rojillos received their punishment for not being more clinical in front of goal. A quick counter attack led by striker Raul who released team mate Flaco and the midfielder stroked the ball home to give his side a 1-0 lead to take into the break.

After a whirlwind first half it came as a bit of a surprise that the momentum had dropped and it wasn’t until the 62nd minute before the home side missed out on a half chance.

In the 76th minute Lanzarote were on an even more uphill battle following the sending off of Ayoze after picking up his second yellow card.

Late on a fantastic opportunity to steal a point fell to the feet of striker Rosmen. The keeper spilled the ball and from a couple of yards out the tall striker blasted over when hitting the back of the net seemed the easier option.

Lanzarote pressured for the final five minutes but couldn’t find any clear opening and left the island of Gran Canaria pointless.

Next Sunday Lanzarote will have their first of two consecutive home matches against 7th placed side Villa Santa Brígida.