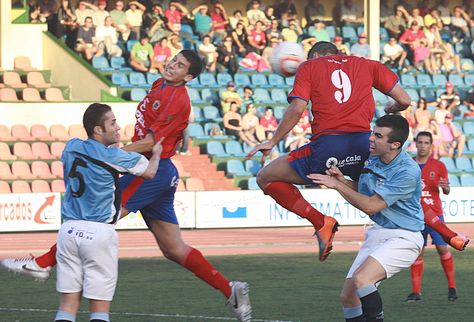 U.D. Lanzarote briefly moved back to top spot following a narrow win against the leagues bottom club with goals from striker Rosmen and defender Saúl.

The match was certainly not a spectacle, however for the many expat supporters who have been struggling with the harsh British winter, having a beer and watching football at a 5pm kick off time with a cloudless sky in 24 degrees heat, the match was magic.

The Rojillos went straight into the attack and in the 7th minute Echedey put fellow striker Rosmen through with a clear run at goal. The tall striker never looked confident and his strike reflected this as his poorly hit effort did not test the Tenerife keeper as the ball flew two yards wide of his left upright.

The opening goal came in the 28th minute. A free kick on the edge of the area was fiercely struck by Ayoze and Rosmen made up for his earlier error by doing what all good strikers should do, being first to the rebound by muscling his way in poking the ball home from close range sending his side into a 1-0 lead.

Guayo blasting in a point for Rojillos in the 79th minuteOnly three minutes of the game had passed before the home team had found the net. A free kick from Yeray Hernández was forced home by striker Héctor giving the early advantage to the Majoreras.

The Conejeros (Lanzarotians) had been taken by surprise as the Fuerteventura side pounded on the pressure. The Lanzarote goalkeeper was the far busier and without a string of saves and missed opportunities this game could have been over before half time. Late on in the half Rosmen had a chance to level the scores but his header failed to hit the target. The Rojillos (reds) managed to reach the break with only a 1-0 deficit to climb.

As has been said a million times in football, “the game is about two halves” and so it proved. What a turn around. Whatever the Lanzarote manager Quico de Diego said to his players during the interlude worked a treat. Only a minute into the second half and winger Toñito was brought down inside the area and the Ref immediately pointed to the spot. Jotha obliged and the Rojillos were 1-1 with all to play for.

Lanzarote totally dominated in midfield and every move forward the Rojillos looked intent on scoring and 15 minutes from time centre back Adrián Martín nodded the Rojillos 1-2 in front.

Corralejo then began to pile on the pressure, striker Héctor fired in a fierce drive which was superbly saved by the Lanzarote keeper. Then came the drama. With almost the last kick of the match midfielder Dino found a gap in the back four and struck the ball home giving his side a share of the spoils. In typical derby match fashion he then ran over and taunted the many travelling Lanzarote fans.

The Rojillos were just seconds away from returning back to the top of the league but with none of the top five winning the Rojillos remain second, two points off leaders Las Palmas B.

Lanzarote next week are at home against Gran Canarian side AD Huracán. The Rojillos have only been defeated once in their last nine outings whilst Huracán have not won in six games and are three points from the drop. The game is scheduled for Sunday at noon but please check the home page a day or two before the match for confirmation.