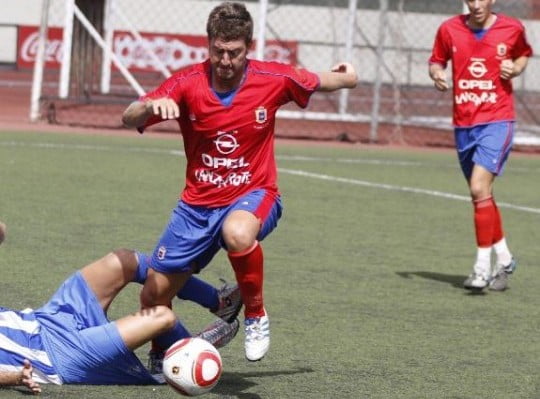 The Rojillos earn a well deserved point coming from behind against 7th placed Club Deportiva Vera in Tenerife.

This was always going to be a tough encounter. The Tenerife side had only lost one and drawn one of all this seasons home matches having won all the others. Lanzarote travelled early on New Years Eve and returned to celebrate the New Year in Lanzarote on the 8pm flight.

Neither side dominated the opening stages with Lanzarote striker Yaco the only player offering any threat. His first strike from distance went wide and his second strike just inside the area produced a good save from the Tenerife keeper by turning the ball wide for a corner.

Just after the half hour the home side took the lead. Right winger Bauldino raced past Lanzarote´s left back and with the keeper drawn he intelligently pulled the ball back for team mate Yoni who had the easiest of tap ins to put his side 1-0 up.

After the break the Rojillos upped the tempo and looked determined to level the scores. The breakthrough finally came 11 minutes from time. Following a corner the ball fell loose inside the box and defender Guayo was the first to react and blasted the ball home to make the score one apiece.

Both sides went hell for leather to find a winner but had to settle ending the year with a point each. Lanzarote slip to second following Las Palmas B winning 2-1 at home the day previous sending them top going into the New Year.

Once again the Lanzarote home fixture for the next match has been changed. Lanzarote will be playing in Arrecife versus U.D. Realejos on Wednesday 5th January at 5pm kick off time.