Lanzarote are currently sitting in the relegation positions with two games remaining. This is their final home match of the season and the club is asking their fans, be it past, present and new supporters to be the 12th man. To encourage support the entrance to this match is for free.

The Rojillos are fourth from bottom and will be playing SD Tenisca that are one position and one point below Lanzarote in the league. This is a real relegation scrap between two historical sides.

SD Tenisca are the oldest football club in the island of La Palma and are the longest serving side in Spain to remain in this division having been there since 1979.

Lanzarote were relegated from Segunda B (Third Tier) in 2010 and since then have been in the Tercera Division (Fourth Tier). The last time Lanzarote played in the league below (Regional Preferente) was in 1994-95 when the Rojillos were promoted as Champions.

Both sides will be fighting for their lives. A loss or a draw for either team will almost certainly spell relegation. This season the relegation positions are extremely complicated. The bottom four will be relegated but there could be a total of seven sides facing the drop.

This depends on several outcomes, firstly how many Canarian sides are relegated from the league above. At this moment all five are in the five relegation positions and it would be in our interests if one or two could escape. This would reduce the amount of sides relegated from our division.

CD Mensajero led by Rojillos manager from last season Josu Uribe is in the best position and his side are just one point from safety with four matches remaining. Secondly, should UD Las Palmas B be relegated from the league above then their C team who are the current league leaders will automatically be relegated which would also be beneficial to Lanzarote´s plight.

Finally, if any of the Canarian teams in our division are promoted via the playoffs then this would also help. The fewer teams in Lanzarote´s league then the fewer sides face relegation.

It is all incredibly complex but the fact remains if Lanzarote remain fourth from bottom then they are going down. Even if Lanzarote win both of their remaining matches they could still face relegation however I doubt that would be the case.

Lanzarote´s final match of the season is away in Gran Canaria on Wednesday 27th April at 8.30pm. Should the Rojillos win this Sunday then the motivation for a win on the final day will be at an all time high, especially as the team that they face CF Unión Viera are second from bottom and doomed for relegation. 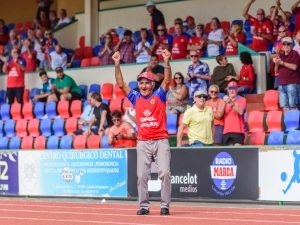 Past players will be coming to support Lanzarote including last season’s captain Rosmen. He will be there to present the “Player of the Season “award prior to kick off to centre back Matheus. Rosmen is the current holder of this award.

Doors open at 11.30am and please bring refreshments with you as the canteen remains closed.

MATHEUS WINS PLAYER OF THE SEASON