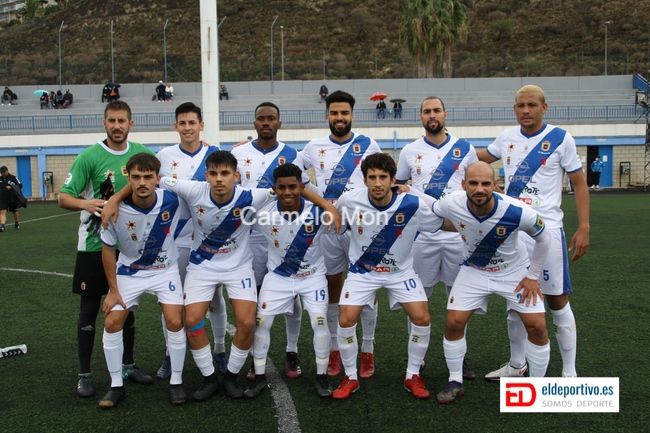 Despite there not being any goals this was an entertaining match with three red cards and played in torrential rain.

Prior to this match the Tenerife side have been nothing short of brilliant at home this season having played five games, winning four of them, with the other a draw.

Both sides went out looking for the win and even though chances were limited there was a high intensity to the game in a very open match.

Midway through the first half it seemed as though the Rojillos were going to have a huge advantage as CD Vera was reduced to 10 men with Jurgen picking up his second yellow card. That advantage lasted less than two minutes as Lanzarote midfielder Keita was also awarded his second yellow card so both teams continued with 10 men each.

On the half hour Rojillos striker Alyson had a good opportunity to give his side the lead but his effort went wide of the target and just before the break the Tenerife side saw an effort fly narrowly over the crossbar.

Early in the second period Miguel Gopar thought that he had put Lanzarote in front with a powerful strike but out of nowhere keeper Edwin produced a super save to keep the score goalless.

In the 63rd minute Lanzarote once again had a man advantage as defender Adrián Plaza received a straight red card as the hosts were left with nine players against Lanzarote ‘s ten. Five minutes later Alyson struck the wood work but the nine men were still creating chances and Ruymán produced a good save to keep the score level.

Late on Lanzarote thought they had scored and won the game when Ayoze Pérez struck a free kick into the wall, the ball rebounded to Machín who tucked it home only for the linesman to raise his flag for a dubious offside decision.

With this point Lanzarote drop one position to 7th and CD Vera rise two places to 9th. Next Sunday 5th December Lanzarote play at home versus 6th placed side CD Buzanada. The kick off for this match has been brought forward to 11.30am as this is to help the Tenerife side with flights to the island. Even though Lanzarote has moved up to level 2 restrictions are no different. You can pay at the gate, no ID necessary but masks must be worn and refreshments are not available in the stadium so bring some water with you.