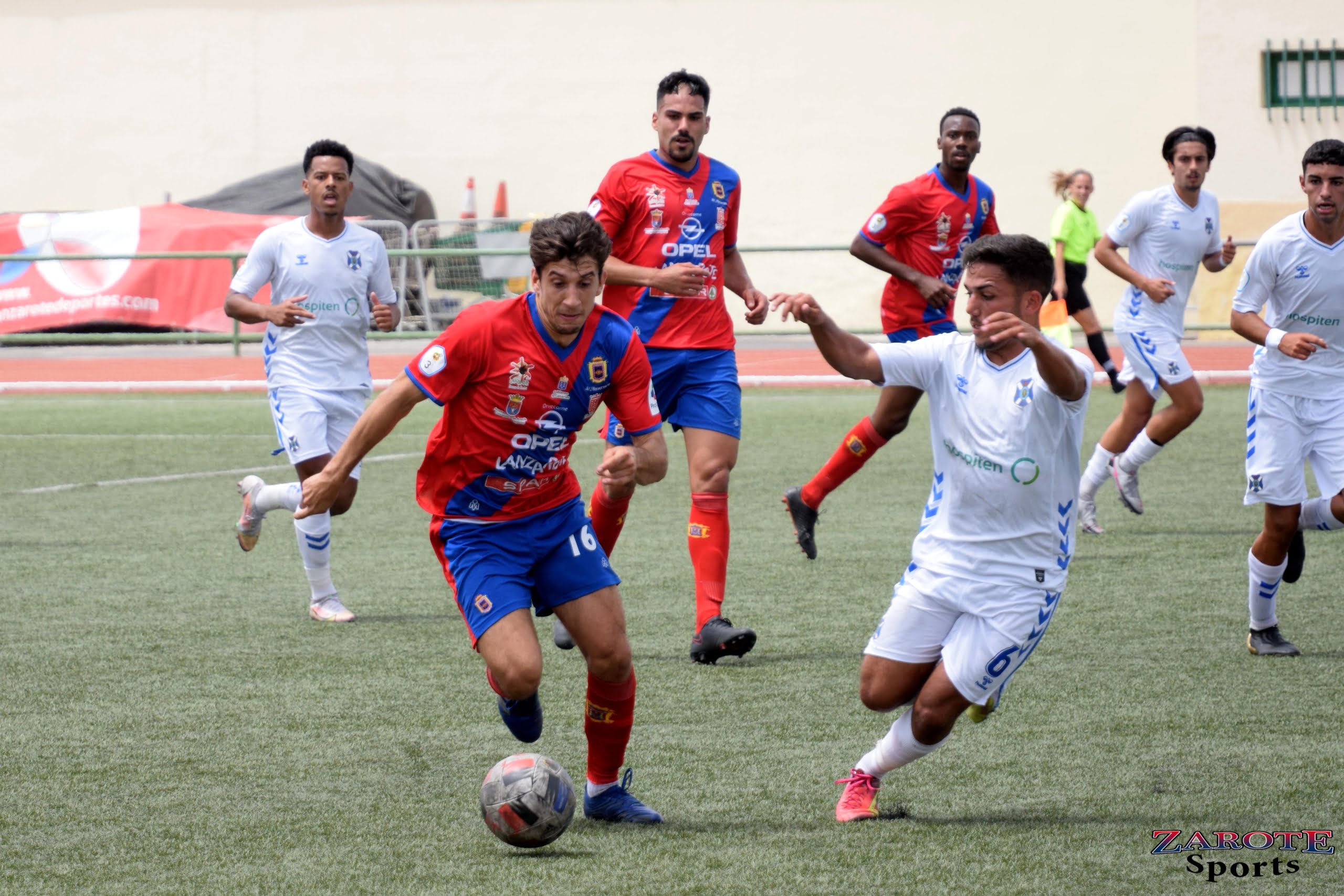 How many times have we heard of the saying “It was a game of two halves” however this is exactly how it was. Tenerife dominated the first half and the Rojillos the much better side in the second period.

Tenerife were sitting in third place in the six team playoff promotion league at the start of the day and began the match eager to get into the top two in order to continue to the next level of the playoffs. Their youthful side were passing the ball quickly and Lanzarote had to chase the game. 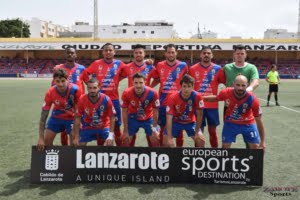 It wasn’t until the 28th minute that the Chicharrero´s (Tenerifians) had their first clear chance on goal. The Rojillios conceded the ball trying to play out of defence. Winger Martinez who proved to be a handful for most of the match fed his striker Aythami but his effort from 10 yards was superbly saved with a left hand dive from Alejandro to keep the score level.

Lanzarote´s only strike at goal in the opening half was in the 36th minute. The ball spun high into the air but Rosmen had kept his eye on it and timed his powerful left foot drive from 10 yards superbly, however his strike hit a defender and the opportunity disappeared.

Three minutes later and with Lanzarote improving as the half progressed Rojillos striker Giovanni timed a run perfectly on the right. He beat the offside trap and had gained a yard on the defender but before he could fire at goal the huge centre back Omar recovered and outmuscled Lanzarote´s January signing and cleared the danger.

The Rojillos came out for the second half with a much more positive attitude and it was the hardworking Javi Morales who tried his luck from 30 yards only two minutes into the half but his effort was always rising and cleared the crossbar by a yard or so.

Only moments later Ayoze Pérez crossed in from the right and once again Javi Morales got in front of the defender but his header went narrowly past the left hand post.

The reply was instant from the Tenerife side. Left back Jeremi teased two Lanzarote defenders then blasted the ball across the face of goal but the pace of the ball didn’t allow striker Diego time to adjust his feet and with an open goal in front of him the ball struck his foot and ricocheted away in the opposite direction to the goal.

In the space of a minute Gopar saw his powerful effort go wide of the left hand post and then Keita bravely won the ball in midfield and released Ayoze Pérez on the right. Lanzarote´s inspirational midfielder fired in a shot across the face of goal, the keeper parried and first to react was the Tenerife defence and another chance had gone.

On the hour the visitors had a wonderful opportunity to go in front. A corner fell kindly to sub Teto, with a free hit at goal from eight yards he smashed the ball but could only hit the left hand post whilst Alejandro looked on helplessly. This was a real let off for the Rojillos.

In the 68th minute a cross from the right was powerfully headed at goal by the Brazilian centre back Matheus but the keeper was well positioned and managed to fist the ball away.

With ten minutes remaining Lanzarote sub Machín´s trickery in the box fooled two defenders but as this new exciting young winger made room for his strike he was blocked by another defender, the rebound fell to Josua however his strike was also blocked as the third placed side rode their luck.

The visitors went in search of a winner in the closing minutes which would have moved them into second spot but were met by a well organised Lanzarote defence and the points were distributed fairly.

The visitors remain third whilst Lanzarote move off the bottom of the table and into fifth. Next week the Rojillos travel to Tenerife to face leaders CD Buzanada.

Player of the Season is now being voted for on Facebook pages Lanzarote football club or UD Lanzarote where you will be required to vote for your top five players over the course of this season. The closing date is Sunday May 23rd at 6pm.