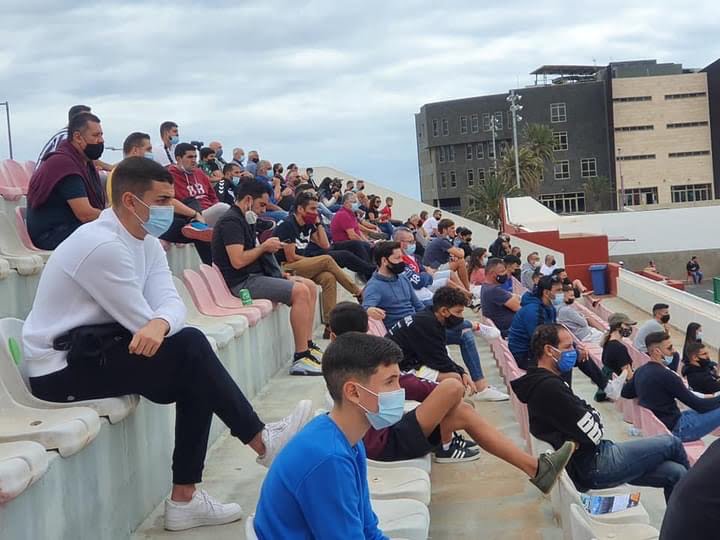 The first match of the New Year is away in Gran Canaria against third placed side UD Las Palmas C this Saturday 9th January.

The Rojillos begin 2021 at the foot of the table but the squad are certainly not lacking the determination to climb out of trouble. The league structure this season is very different to past years. If you have missed what I wrote about how the league works it’s here: https://mercancialanzarote.com/2020/09/22/explaining-the-canarian-league-system-for-2020-21-season/.

The initial league is only 18 matches of which Lanzarote have played seven games so there is no time to waste, points are needed and they are needed now. The good news is if Lanzarote can erode the six points deficit for safety and move from 10th spot up to sixth position then they will be in the playoffs for promotion, if not they will be in the relegation playoffs. 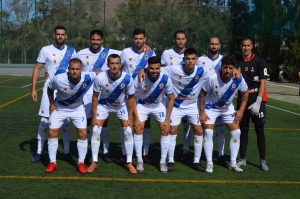 Anyone connected to UD Lanzarote will understand the problems the club has incurred this season. Only being able to train as two separate units and not permitted to play any pre season friendlies prior to the league kicking off has been an enormous disadvantage.  The Gran Canarian sides trained as normal and played the normal seven pre season matches to prepare for the campaign ahead.

Before the season began I did speak to a few fans about this and we agreed that at semi pro level it was fairly evident that our opening matches were going to be extremely difficult. The squad couldn’t even have an 11 a side match between themselves until a week before the campaign begun. Even some pub sides have a better pre season than this.

On top of this we are the only club in the league that has not allowed fans to support their team at home matches. Some of our fans have seen the team play but only away in Gran Canaria or Fuerteventura where government controls are sensible. 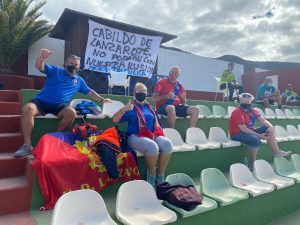 Jacci next to flag sensibly distancing herself from her husband Steve to our left.

This leads us to our own government which is run by Maria Dolores Corujo of the political party PSOE. Despite Lanzarote having the biggest stadium in the league and much lower Covid rates than Tenerife or Gran Canaria the club has not been allowed to admit fans to their home games.

For many fans and club officials it is extremely hard to see the reasoning behind all this. The stadium can hold 6000 people and the club would have been happy with just 300-500 fans that would have been able to distance two metres from one another with ease.

As all health workers will know the main spread of Covid comes from family gatherings (mainly indoors) and in the Canary Islands there is a unique situation as often three generations can live in the same household. The locals are renowned for their fiestas and prior to Christmas infection rates were in their low 30´s but after Christmas and New Year celebrations, infection numbers have risen to 182 and will probably rise following Los Reyes (Kings Day) yesterday.

Surely the government should have banned family gatherings over the Christmas period if they were so concerned about the numbers as wasn’t this rise obvious?

Next door to the stadium in Arrecife the public are allowed to go to the theatre and hundreds visit the gym every day. Don’t these places pose more of a threat than an outdoor stadium with a huge capacity?

I understand that politicians are under huge pressure and maybe I am missing something here but it would be nice if the President of our government could explain her reasoning. We must move forward! We cannot remain in a bubble, there is a risk in everything we do and I for one will never support someone that doesn’t even try.

Maria Dolories Corujo seems to be taking this easy option and I will not accept that, however the only way I can show my frustration is when I cast my vote at the next local election. We need our island government to support us and give us the opportunity that we, like all other Canarian football grounds, be allowed for the public to go through our doors and prove like all those other clubs that Ciudad Deportiva is a safe place to watch a game of football.

It is not just UD Lanzarote that is suffering; the ban is on every football club on the island. Parents can drop their children to a match but are not allowed to watch them play. Instead many of the parents meet up together in busy Cafes waiting for their children to finish. Is there any logic in that? What is the more dangerous, all sitting down together chatting in close proximity indoors or outdoors where it is simple to distance? Logic is a word that was lost very early in this pandemic.

As with many lower league clubs funding has been a huge problem this year. Not being able to sell season tickets, bar takings and gate receipts has left the club in a vulnerable position.

Director of UD Lanzarote David Timmons came up with a great idea called “12 Days of Christmas” to raise some funds by asking owners of hotels, villas and apartments if they could donate a week of their accommodation. Then with a GoFundme everyone who donated 10 Euros were given one ticket in the draw.

Every day for 12 days from the 12th December a live draw took place. All of the 12 winners were delighted and with the help of David Timmons, Brendan Byrne, Geraldine Mc Fadden and Susana Fondón as well as property owners and of course everyone who bought a ticket, a vital 7,030 Euros was raised.

The club has decided to let that fund continue because when home games are streamed free of charge live on YouTube we would are asking for a small donation to help the club through these difficult days. To contribute on home matches please click here https://www.gofundme.com/f/UD-lanzarote

First and foremost the club, players and all supporters need positivity so please support the club in any way possible and let’s start climbing that league table.

MATCH, SIGNINGS AND THAT DAMN COVID
Scroll to top