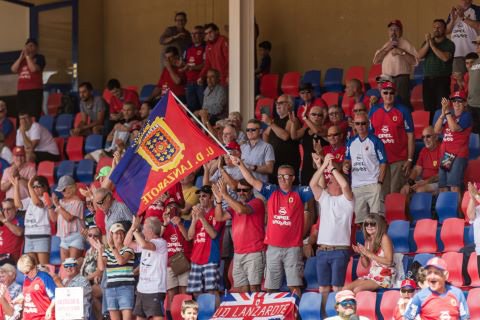 Today should have been the Lanzarote´s final game of the season at home to CD Tenerife B, though since late March it was becoming apparent that the Rojillos had already played their final match of this campaign.

The Spanish Football Federation confirmed the end of the league season on the 12th May however the playoffs still have a great chance of happening though nothing has been confirmed.

SD Tenisca were top when the final match had been played though they had played a game more so the final placing has been decided by how many average points a team has earned per match. This leaves Tenerife side CD Marino in first place followed by SD Tenisca, UD San Fernando and finally UD Tamaraceite.

If possible a mini tournament may be held in La Gomera involving those clubs with CD Marino v UD Tamaraceite and SD Tenisca v UD San Fernando with the winners meeting in the final and whichever club succeeds in the final would be promoted to Segunda B (Third Tier).

These matched may be played over 90 minutes with no extra time or penalties. If a match were to finish in a draw the club with the higher league position would claim the win. Leaders CD Marino would therefore have a huge advantage going into each game with an unofficial 1-0 advantage.

UD Lanzarote had hit their best form of the season in their final five games, remaining unbeaten and taking nine points in the process which in turn moved them six points clear of the relegation positions but they were nowhere near competing for a playoff spot.

The club is now looking forward to the 2020/21 season which will mark the 50th Anniversary of the club. At this moment it is impossible to assume how things will turn out though there is the possibility of the league being split up into two groups of either 11 or 12 teams. This would mean the season would consist of a minimum of 20 games or a maximum of 22. There is also the possibility that it could still be one league with 22 sides meaning nobody would have been relegated but two sides would have gained promotion.

I haven’t updated the situation in recent weeks because it is all speculation and for everything to be resolved it may yet take some time. Season ticket prices would obviously have to be adjusted to take into the amount of games and that is assuming that matches won’t be played behind closed doors. I do feel that this won’t be the case as it is being played outside and September is a long time away however the authorities could allow only a certain amount of spectators but once again this is speculation.

Once I have more concrete information I will update.

LANZAROTE’S HOME MATCH THIS SUNDAY HAS BEEN SUSPENDED, 11th March 202...

THE CANARIAN PLAYOFFS FOR PROMOTION TO SEGUNDA B (THIRD TIER), 15th July 20...
Scroll to top