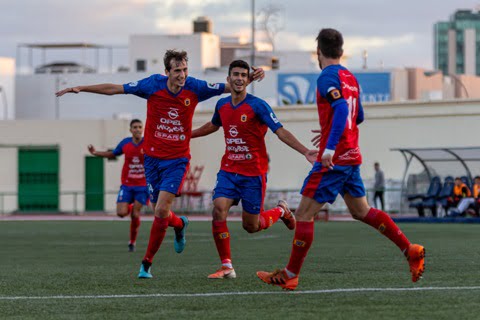 If there was ever a match to summarize the Rojillos season this was it. Two blatant penalty decisions not given and a last minute winner wrongly ruled out for offside cruelly deny Lanzarote victory. 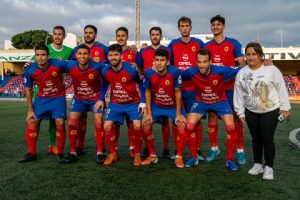 A remarkable first half performance winning the battle in midfield and showing all the talents the team possess, then a complete change of mentality in the second period sitting further and further back defending and allowing the inevitable to happen. 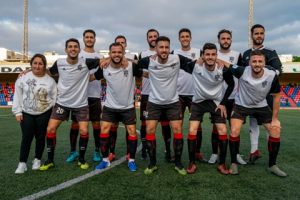 It probably sounds as though the Rojillos dominated the opening 45 minutes but actually the majority of possession was held with the Gran Canarian side though Lanzarote created all the chances.

The opening goal came in the 5th minute when a perfect cross from the left by Alex Fuentes was nodded home by striker Rami and Lanzarote led 1-0. 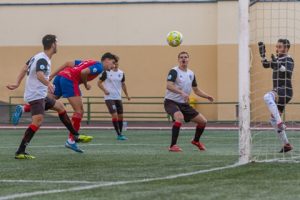 In the 13th minute a quick long ball from Alex Fuentes sent Rami racing down the left hand flank. The striker beat the defender to the by-line and clearly had his right foot taken away in a challenge but incredibly the only thing the official awarded Lanzarote was a yellow card to their manager Jero Santana for protesting.

The visitors always looked good on the ball and in the 27th minute a fierce strike from the edge of the box by ex Rojillo Javi Trujillo was fisted away by keeper Rúyman.

In the 29th minute Lanzarote’s best player in the first half Alex Fuentes turned his defender before unleashing a curling effort from the edge of the box destined for the top corner. The keeper at full stretch pulled off an amazing save tipping the ball over for a corner. 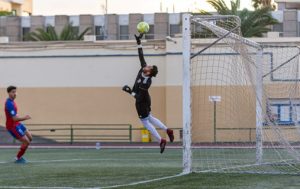 A top class save by the Unión Viera keeper Guanche.

For the next 15 minutes Lanzarote played their best football that they have done this season. The midfield didn’t allow their opponents a second on the ball and bullied the ball back at every opportunity.

In the 34th minute Miguel Gómez picked up a rare misplaced pass from play maker Xiraxi and ran at the defence then released a super pass to Nico González and from 10 yards the Argentine slid the ball under the keeper to send his side 2-0 up. 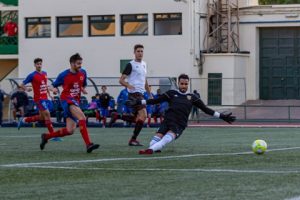 Two minutes later and a free kick from 20 yards by defender Raúl struck the left hand post, the rebound fell to Rami who looked as though he was held back forcing him to shoot over the bar from six yards, once again the referee gave the advantage to the visitors. 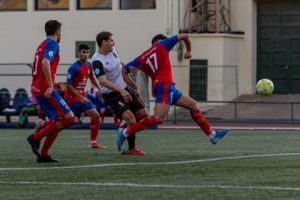 Rami clearly pulled back when striking from close range. One of two clear decisions he never got.

In the 42nd minute Miguel Gómez won the ball in midfield and released Alex Fuentes. This impressive 20 year old struck a thunderbolt from 20 yards and saw his effort fly in to the bottom left hand corner and Lanzarote were flying with a 3-0 advantage. 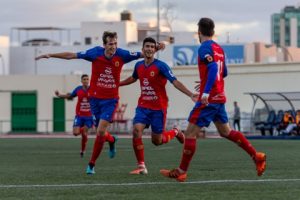 Wonder-boy Alex Fuentes (centre) giving his side a 3-0 halftime lead.

Just a minute later and a cross from Adrián on the left found the head of Nico González but the keeper produced a fine save on the goal line to give his side some hope as his side went into the break with a three goal deficit.

As the sun began to set at the beginning of the second half so did Lanzarote´s style of play. Gone was the attacking spirit and it was replaced with the desire to sit back and guard their lead. 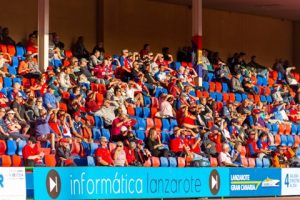 Seeing clearly in the beautiful December sun was the only problem the fans had during a captivating first half.

In the 58th minute following some pressure the inevitable happened as captain Cristian fired home from eight yards to ignite the comeback.

Only four minutes later and from close range the ball struck the hand of defender Raúl and the referee correctly awarded a spot kick. Midfielder Xiraxi stepped up and fired the ball home to send the Rojillos players and fans into a bag of nerves.

Keeper Rúyman produced a brilliant one handed save in the 71st minute from a volley by striker Calum to just about hold on to his sides slender lead. 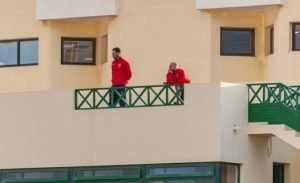 Feeling helpless our injured captains Rosmen and Ayoze Pérez as they wonder what on earth is going on below them.

In the 75th minute the visitors were awarded a free kick on the edge of the right hand corner of the box. The best player on the pitch Xiraxi produced a bit of magic sending the ball into the top right hand corner and the score was now level at three apiece. 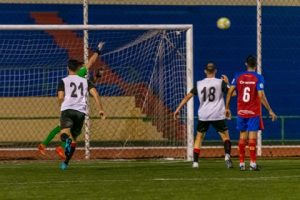 A wonder strike from man of the match Xiraxi not giving keeper Rúyman a chance.

Strangely enough Lanzarote began to play better and in the 80th minute Miguel Gopar came close to restoring the lead but his effort just inside the box was superbly saved by the Gran Canarian keeper.

In the 89th minute a low curling cross from Adrián found sub Aday López at the far post, the striker got a toe onto the end of the cross and guided the ball into the bottom left hand corner thinking he had got the winner. 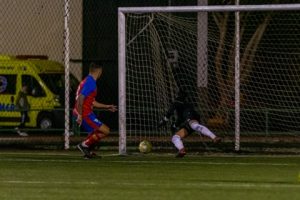 Aday López in which should have been the winning goal.

Unfortunately for him  he was wrongly given offside from a poor official who couldn’t of had a better view of the line which ended up Lanzarote drawing their tenth match out of the 16 games that they have played.

Lanzarote are in 13th spot seven points from relegation and an almighty 12 points distant of the playoff positions. This Sunday Lanzarote travel to Tenerife and face third placed side CD Marino.

This match was played at home in Arrecife however please check where they will be playing in their next home game on Sunday 22nd December because it will either be in Tias or Arrecife. As soon as the club receives authorisation for the switch I will post on here and also Facebook Lanzarote football club where you can also see photos of this match.

THE HOME GAME THIS WEDNESDAY IS CONFIRMED AT CIUDAD DEPORTIVA IN ARRECIFE AT...