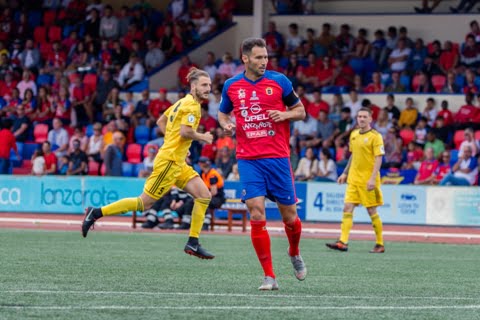 The Rojillos dream of promotion to Segunda B (Third Tier) ended on Sunday afternoon by the second placed side from the island of La Palma. 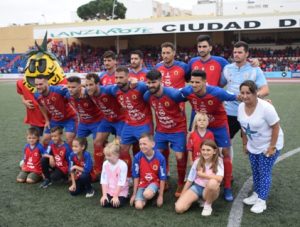 CD Mensajero was safe in the knowledge that whatever the result today that they were already qualified for the playoffs beginning next weekend.

A great incentive for our visitors was that a win would see them finish second; playing the second leg of their playoff match at home and also they would qualify for the Copa Del Rey. 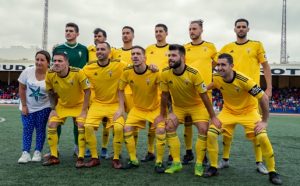 On the other side of the coin Lanzarote needed something from the match, a draw would have seen the Rojillos qualify in either third or fourth but a win would have given them a second placed finish and all the benefits that Mensajero will now enjoy.

A dreaded defeat, then it would be out of the Rojillos hands and depend on two other results going against Lanzarote and that is exactly what happened.

At the start of the day CF Unión Viera were in the last playoff position, fourth. A win would assure them entry into the playoffs and they overcame bottom side UD Las Zocas with ease winning 4-0. 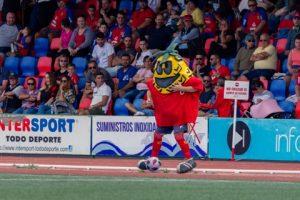 A welcome return for the club mascot. The Piña

CD Tenerife B was sitting just outside the playoffs in fifth and they had to win at home to league Champions UD Tamaraceite to stand any chance of qualification. This was always a great possibility as Tenerife were bang in form winning five of their last six matches with the other game a draw. They comfortably ran out 3-0 winners. 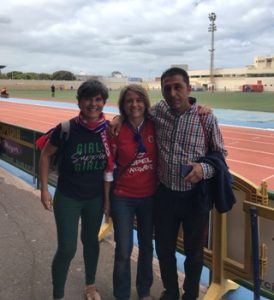 There could be another sting in the tail for CD Tenerife B because their first team slipped into the relegation zone on the weekend in Segunda A (The Championship) and if they are still there in three games time then the B team could not be promoted to the same league.

UD Tamaraceite had wrapped up the league title many weeks before but since the end of March they have failed to win. They will now be going into a one playoff match over two legs to see if they are promoted to Segunda B after having not secured a victory in their last seven outings. 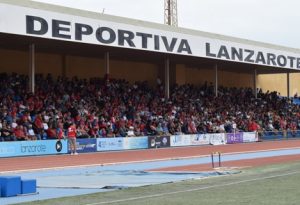 A great vocal crowd of around 2000 urged their team on.

The 2000 crowd were treated to the presentation of the Lanzarote side who first won promotion to Segunda B back in 1998/99 season, when local legend Maciot scored a winner in front of at least 10,000 fans to send Lanzarote into Spain’s bronze league.

Two of Lanzarote´s present day club directors Pedro Cruz and José Andrés Hernández as well as our current captain 38 year old Rosmen were amongst that great team from 20 years ago. The fans gave them the applause that they richly deserved. 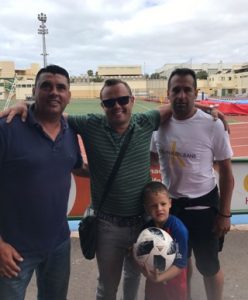 Players from the past. Left to right : Pedro Cruz and José Andrés Hernández (both now club directors) with ex Real Madrid player Jotha

From the moment the referee blew his whistle to start the match you knew that the Rojillos were going to have a battle on their hands.

In the opening stages Lanzarote were sharp on the ball but showed nerves whereas the visitors played with the freedom knowing that they had already qualified.

Lanzarote did manage to control their emotions and in the 24th minute a powerful strike from Pedro Viera was saved by the keeper and the rebound fell to Miguel Gómez, the newly crowned Player of the Season did everything right with his left foot strike from eight yards but a defender did brilliantly blocking his effort on the goal line. 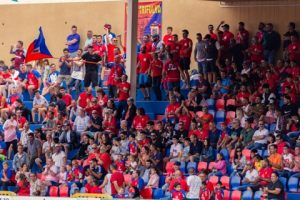 The La Palma side looked fit and fast and in the 38th minute they hit Lanzarote like a whirlwind. From the back they moved the ball forward with accuracy and pace leaving the Rojillo defence on the back foot. The ball was centred and winger Vianney struck low from ten yards to give his side a precious 0-1 lead amid huge suspicions for offside.

Just before the break there were further problems for the Rojillos when defender Luciano who had not looked 100% went down clutching his hamstring and was replaced with Brad who slipped into the centre back position.

The Rojillos came out for the second half with a determined look and in the 51st minute Nico González forced the keeper to make an excellent save from his 20 yard strike.

Ten minutes later and the never say die Alex Yunes volleyed over the bar from 12 yards.

In the 68th minute the whole crowd were off their feet when Nico González headed the ball towards goal with the keeper stranded, somehow the defender got his head under the ball on the goal line and managed to clear the danger despite Javi Morales launching body and soul trying to get a touch to level the score. It was first class defending. 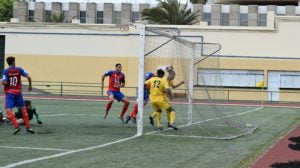 An outstanding clearance from the Mensajero defender.

As you would expect it was one way traffic with the fans urging their team to get a goal. In the 79th minute the keeper pulled off another great save from a 20 yard Enrique Castaño thunderbolt.

Five minutes later and Miguel Gómez fired a ball low from the left across the six yard box, captain Rosmen stretched those long legs of his but could only get a toe on the ball which was not enough as the ball whisked past the right hand post. 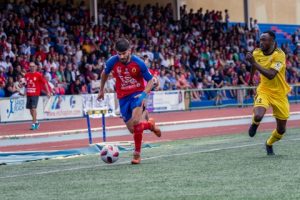 The Mensajero defence had played an excellent game withstanding the constant assault and were overjoyed to hear that final whistle.

It would be a mean person to criticize the performance of the Lanzarote team as each person gave everything that they had. Alberto Escudero was superb in midfield whilst Nico and Alex Yunes ran their hearts out as did everyone in a red shirt.

Lanzarote will begin next season’s campaign in their tenth consecutive attempt to return to Segunda B (Third Tier).

At the end of this match it was a very subdued Miguel Gómez who was presented his trophies by fans Carole and Fran for UD Lanzarote´s best player of the season. 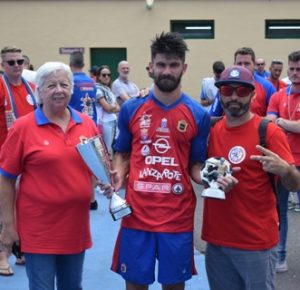 Rojillo fans Carole and Fran presenting the Player of the Season award to Miguel Gómez.

It was also a dreadful day for Yaiza, the islands other club in this division as they lost their last game away to SD Tenisca 4-0 and will say goodbye to their six years that they have spent in the Tercera Division (Fourth Tier) as they now return to Regional Preferente.

GOODBYE AND THANK YOU MAXI BARRERA, 23rd May 2019,
Scroll to top