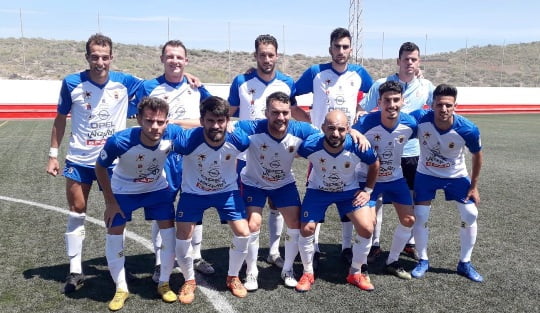 The Rojillos failed to secure a playoff spot over the weekend, however how the results panned out should they win in their final game at home on Sunday they will finish second and almost certainly qualify for a Copa Del Rey spot next season.

The Tenerife side had already been relegated prior to this match but there was no way that they were not going down without giving their visitors a bruise or two. 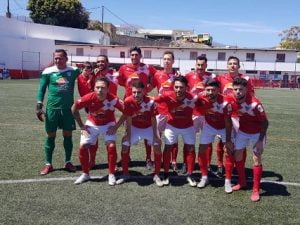 In the 22nd minute who else but Miguel Gómez picked the ball up wide on the right, skipped past a couple of defenders moving into a central position, he then unleashed one of his trademark low powerful strikes beating the 42 year old with a 20 yard effort into the bottom right hand corner sending Lanzarote 0-1 up. 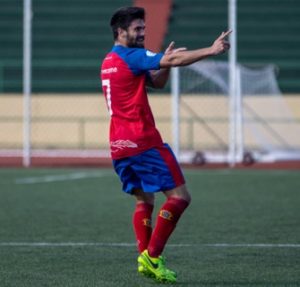 The Tenerife side knew that they were being outclassed and for the remainder of the half began to bully a few of the Lanzarote players with some rash fouls which were ignored by the officials.

Ten minutes into the second period and Rojillos manager Maxi Barrera was forced to bring off his best player Miguel Gómez fearing that the 27 year old winger could get injured.

Las Zocas fought back and in the 70th minute scored their final league home goal in the Third Division through striker Adán to level at 1-1.

To make matters worse for the Rojillos Alex Cruz picked up his second yellow card in the final minute and was given his marching orders.

The Rojillos were not happy with this point but nevertheless they had moved up to second spot albeit briefly as their rivals were all playing the following day.

Form side CF Unión Viera had taken 16 points out of a possible 18 in their last six matches began the weekend in second spot. Thankfully the side that claimed all three points against Lanzarote for fielding an illegible player CD Marino ended this good run beating them 5-1.

CD Mensajero began in fourth but won against derby rivals SD Tenicsa 2-1 and now occupy second spot. CD Tenerife B could only play out a goalless draw following their five wins on the bounce and remain in fifth two points behind CF Unión Viera who are in the final playoff position.

Lanzarote are sitting in third place just one point behind CD Mensajero who they play on the final day. These are the three possible outcomes:

The final home league game versus CD Mensajero is this Sunday 19th May at 12 noon and there is absolutely no doubt that the Rojillos will be looking for a win to leapfrog their opponents and claim second spot.

THE OTHER END OF THE TABLE

Fellow island club Yaiza picked up a vital 1-0 home win versus CD Buzanada and have moved out of the relegation places but by only a point. Their final game will be fascinating as it is away against the side immediately below them SD Tenisca.

If Yaiza can earn a point they will be playing their football in the Third Division next season but failure to do so then they will be relegated and SD Tenisca will remain.

One thing is for certain and that is Yaiza must improve on their away form. They have not picked up a single point in their last five games on the road.

The La Palma club have a good fan base and there is no doubt Yaiza will be in for a hostile reception.

Our Fuerteventura friends CD El Cotillo brave fight to fend off relegation ended on Sunday when they lost away 5-3 to rivals Atlético Tacoronte. We hope it’s a swift return for our friends on the coast as we all love our Cotillo away trip.