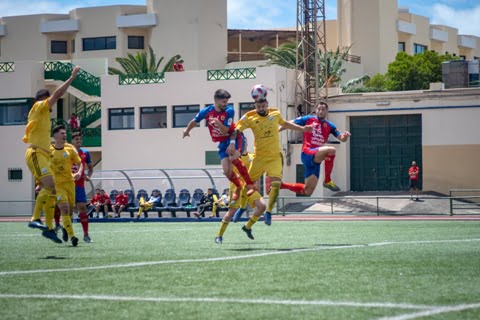 The Rojillos began the day in fifth spot following wins from playoff rivals but they knew that a home victory would push them into second position and back into the playoffs. 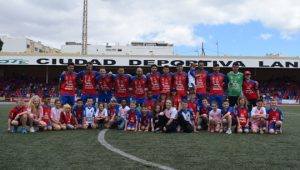 Many mascots for the match from many different nationalities.

On paper this should have been a straight forward home win against the mid table side who have no chance of reaching the playoffs or of being relegated. It did not work out that way. 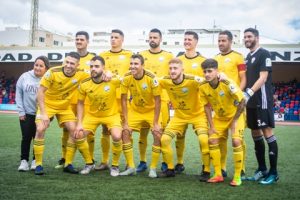 Lanzarote completely dominated the first half and had plenty of chances to take the lead and possibly see the floodgates open. The clearest opportunity came in the 19th minute when midfielder Alberto Escudero was hacked down inside the box and the referee ordered a penalty.

Lanzarote´s mister reliable Ayoze Pérez stepped up to what we all expected was his normal blast the ball home.

In contrast the vice captain praying that the keeper was going to commit himself to a corner gently dinked the ball into the air and to his horror his prayers were not heard as the keeper stood still and waited for the ball to fall into his arms. 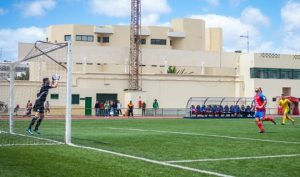 Ayoze would have wished that the astro turf would have just swallowed him up but to be fair to last season´s player of the year continued the match positively and was one of Lanzarote´s best players.

Just a couple of minutes later Rosmen headed low into the corner but the keeper made an outstanding save to his left hand post tipping the ball around for a corner. A minute on and again the Lanzarote captain saw his header from eight yards narrowly go over the bar. 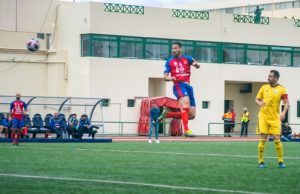 It was one way traffic as the Tenerife side had all men on deck scrambling the ball away to safety and managed to hang on until the interval with the game scoreless.

Lanzarote began the second period still the superior side and in the 63rd minute a corner from Nico found Ayoze at the far post, he did well heading the ball down and Rosmen instinctively put out his right foot but the ball hit the post and went straight into the keepers arms. One had a feeling that this was going to be a difficult day. 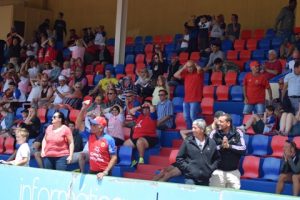 Another chance goes begging as Lanzarote fans hold their heads in despair.

The Rojillos hero on many an occasion this season Miguel Gómez had come on as sub and in the 64th minute, he typically ran at his opponents and let fly from 20 yards but the keeper again made a terrific one handed diving save finger tipping the ball away for a corner.

The visitors then seemed to think to themselves that “Right, you have given us a beating and we are not having it anymore”.

For the first time in the match the home defence had to work. In the 72nd a brilliantly whipped in corner from the left could only be parried by keeper Agoney and in the scramble it was defender Jon who touched the ball home to silence the home crowd and give his side a shock 0-1 lead. 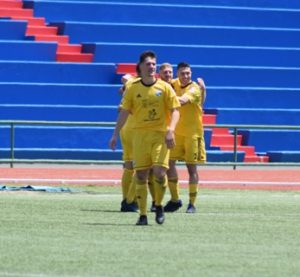 Digging in and celebrating their rewards for the Tenerife side.

As the Rojillos continued to press forward the Tenerife side broke on the counterattack. In the 75th minute the ball was squared into the centre and from ten yards striker Adan thought that he had scored the second but Agoney did superbly well to scurry across the box saving the effort and keeping his side in with a chance. 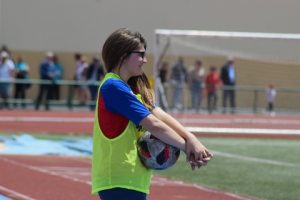 Our ball girl Charlea did a terrific job keeping the game flowing as did the officials.

In the 84th minute the forever hardworking Alex Yunes saw his volley just go over the bar from eight yards as his team were running out of ideas how to break down this stubborn defence.

Early in stoppage time Ayoze Pérez did well squeezing in between two defenders then picking out sub Dani with a perfect cross, unfortunately his free header from eight yards went inches painfully wide of the right hand post. 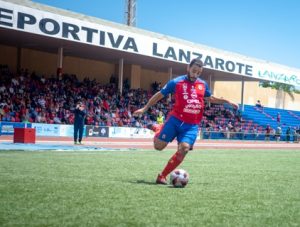 Sub Dani came so close in added on time to earn a point for his side.

This defeat was unexpected and did hurt but with four matches remaining a guaranteed playoff position is still in Lanzarote´s own hands.

I saw Ayoze after the match and he was distraught with his mistake from the penalty and has publicly apologised but one cannot fault his and his teammate’s commitment to the cause. There is no doubt that Maxi Barrera´s men will bounce back from this disappointment. 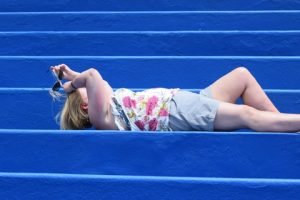 This lady wasn’t so disappointed with the defeat as she topped up on her tan.

On a positive note playmaker Enrique Castaño returned from injury as sub and also the outstanding Argentine centre back is imminent on a return from his injury.

Next week Lanzarote travel to Tenerife to face Atlético Tacoronte who have pulled away from relegation problems with two consecutive victories.

There are seven teams in the mix with four points separating them for the three available playoff places remaining. League leaders UD Tamaraceite have already guaranteed their spot and will shortly be crowned champions as second placed CD Mensajero are ten points adrift.

Lanzarote´s next home game is due on Sunday 5th May but time and date will be confirmed on here closer to the game.

Photos of this match are on Lanzarote football club Facebook page.