UD Lanzarote paid a heavy price by only being allowed to play two pre season friendlies by their own local government with this away defeat. 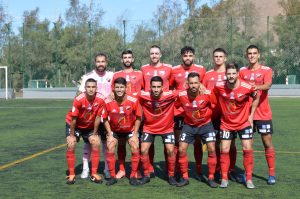 A winning return to the fourth tier for the Gran Canarian side.

Take nothing away from the Gran Canarian side, the stubborn Lanzarote government certainly was not their fault. After 10 years in the Regional league they returned to Tercera Division football and claimed a big scalp in their first match.

The Rojillos began the game the much better of the two sides but failed in converting their opportunities. The home side only started to threaten Lanzarote in the later stages of the first half but the score remained goalless at the break.

The second period couldn’t have started better for the newly promoted side. Only twenty seconds had been played and striker Joaquín made the most of an error in the Lanzarote defence to give his side a 1-0 lead.

This gave the Gran Canarian side the lift and confidence to their play and the Rojillos did not have an answer.

Even with the introduction in the 53rd minute of Miguel Gómez and Ayoze Pérez this didn’t change Lanzarote´s style of play.

Many may think that Lanzarote will make the excuse of not having a competitive pre season but when you go into a league in semi pro with just two friendly games played, you are going to find trouble. The two teams Lanzarote did play were also in the same position having not played matches so these games lacked intensity and this intensity is what the Rojillos had no answer to in this match.

Inevitably Guía scored their second goal in the 66th minute, once again with Joaquín and Lanzarote had a mountain to climb.

The hosts did not let their opponents have any time on the ball and fought and bullied like any newly promoted side does.

Deep into stoppage time Ayoze Pérez reduced the deficit but it all came too late as the 200 fans that were permitted to watch the match saw their side earn their first three points of the season.

There is a lot of work to do this week for Lanzarote´s manager Josu Uribe as he plans for the visit of CF Unión Viera. Next Sundays opponents will also be full of confidence after a superb result on their opening match beating the fancied UD Las Palmas C 4-1.

This may be just the first match but in a league where there are only 18 matches you must hit the ground running. The club is also having many problems with its local government who have still not given permission for fans to watch the game.

Other sides have had home fans supporting and one would have thought with Lanzarote having a stadium capacity of 6000, allowing 500 fans inside would be easy to self distance. So far the authorities remain stubborn and we will have to wait to see the outcome.

GOODBYE TO NINA, THE GODMOTHER OF U.D. LANZAROTE (24th September...
Scroll to top