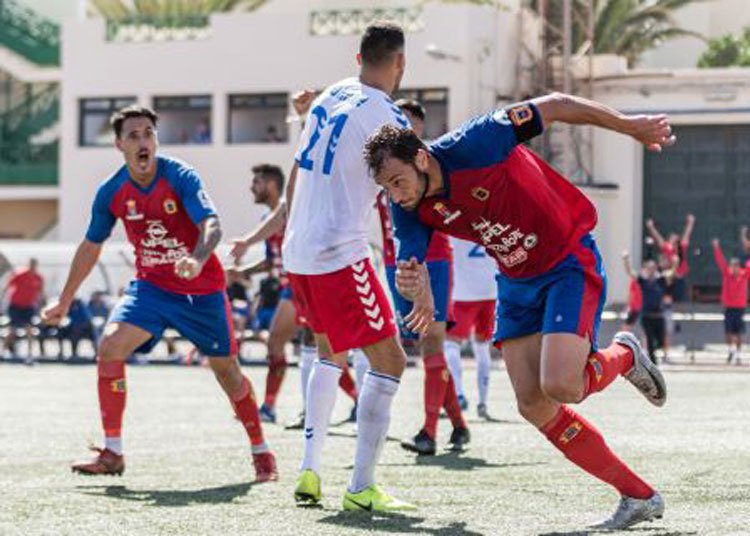 The Rojillos come back from conceding an early first half goal to level in the 87th minute and came ever so close to snatching a victory in added on time.

Another incredible February day with temperatures in the mid 20´s greeted the 600 plus fans and they were rewarded with a great game of football. 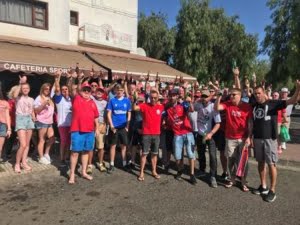 Whilst Britain is suffering with Storm Dennis spare a thought for Lanzarote´s fans as Sunburn Steve produces temperatures into the mid 20´s without a cloud in the sky.

The visitors at the start of play were sitting in the last playoff position 4th spot, whilst the Rojillos were just three points off the relegation places. 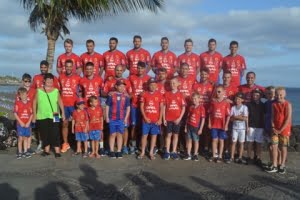 The Gran Canaria side are heavily supported by UD Las Palmas and have attracted some ex Primera Liga players to their ranks. After comfortably winning this fixture last season 0-2 Lanzarote knew that they had to be at their best. 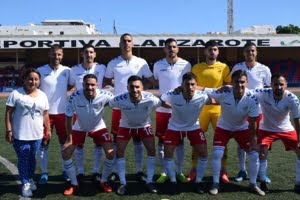 Last season’s Champions (failing in promotion in playoffs) looked the much superior side in the opening exchanges. Lanzarote could not find any rhythm but Tamaraceite were pinging the ball around with pace, precision and intent.

In the 8th minute a cross from the right produced an excellent bit of strike pair understanding when Padron cushioned a header back to his partner and from 12 yards Samuel Casais hit the sweetest half volley low into the bottom left hand corner to give his side an early 0-1 advantage.

After seeing the team sheet prior to the match surprisingly three of the four Lanzarote Captains were sitting on the bench. Was it foolish or brave of the Rojillos manager leaving Rosmen, Ayoze Pérez and Miguel Gómez sitting alongside him as play began?

The midfield of Lanzarote battled for everything but it was only striker Aday López up front who looked to have some confidence, this was not enough as the visitors were better in all departments and went in hunt of extending their league before the interval. 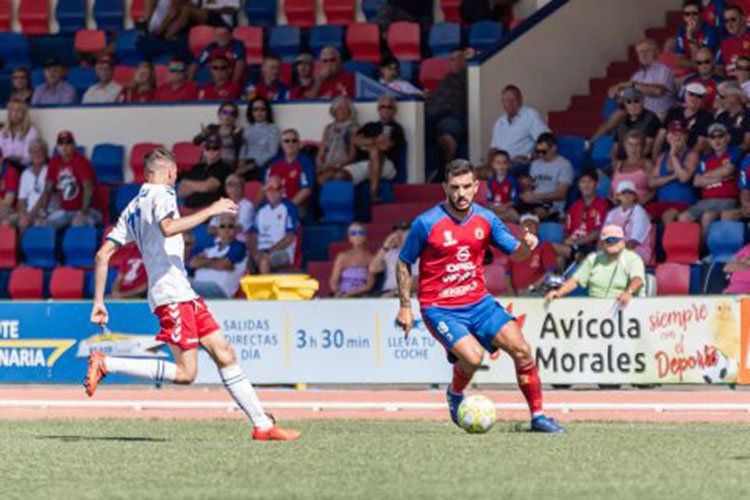 Aday López one of the Rojillos brightest players in the first half.

The Gran Canarian side had two great opportunities before the break. Rojillos midfielder Kilian was hustled off the ball in the centre but to his credit won the ball back before the striker pulled the trigger and four minutes before the break a well worked move led to a free strike at goal from Ortega. The Lanzarote defence looked on in prayer as he hit a free strike from 10 yards and their prayers were answered as the ball flew straight at the Lanzarote keeper Alejandro who kept the score down to 0-1 at the half time interval. 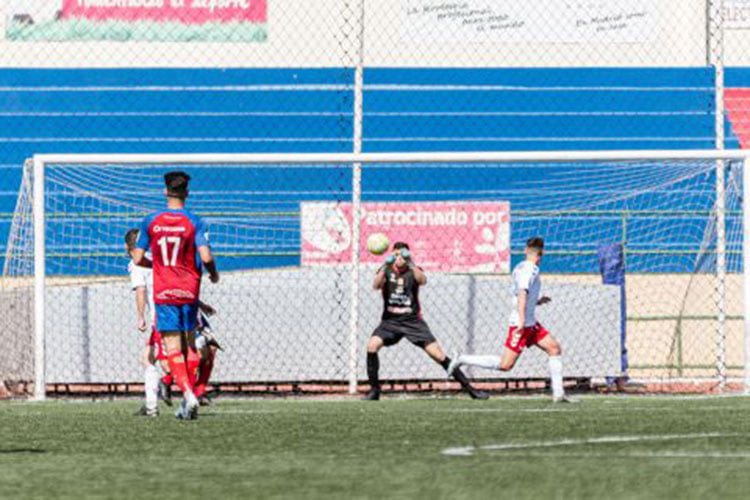 The visitors coming close to giving themselves a 0-2 half time lead.

Lanzarote´s failure to hold onto possession in the first ended immediately with the introduction of midfield maestro Ayoze Pérez and captain Rosmen. It is often said in football, it’s a game of two halves and this match was a prime example.

It was now Lanzarote that were making their opponents chase the ball and Ayoze Pérez´s refusal to allow his opponents a second on the ball was paramount to his sides change of attitude.

A free kick from Ayoze found the glancing head of centre back Omar but his effort from 10 yards went inches wide of the right hand post. Nevertheless this was the first effort of any note in the match but you could feel it was not going to be the last.

In the 54th minute a great low cross from the left by Aday López invited Rosmen into a diving header but once again the ball narrowly flew past the left hand post.

In the 63rd minute Rosmen sprinted on to a throw by Aday and managed to shrug off his defender but as the inspirational Rojillo captain was pulled the referee blew for a foul. In hindsight I am sure the official would have wished that he had played the advantage as Rosmens cross was superbly tucked away by Rami into the far right hand corner but it all meant nothing other than a Rojillo free kick and a yellow card for the defender. 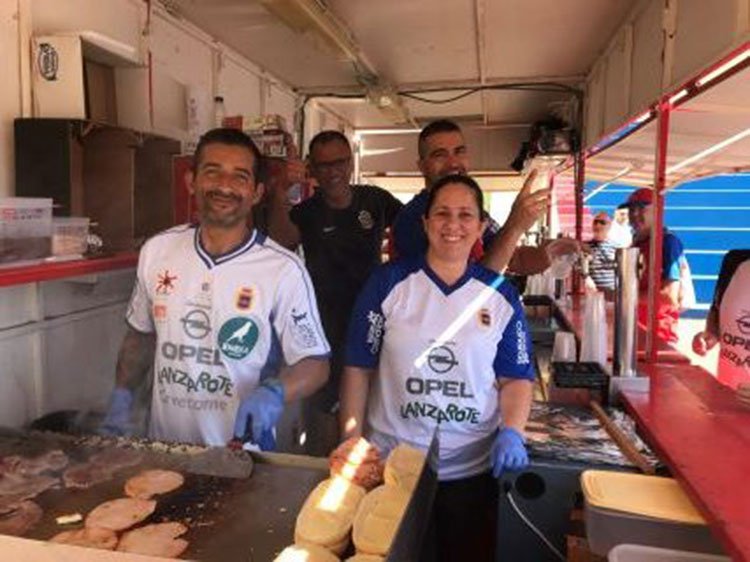 Rojillos manager Jero Santana then played his last hand by bringing on midway through the half the exciting Miguel Gómez.

Lanzarote kept on applying the pressure but they were up against a hugely experienced defence with centre back David Garcia who has the all time leading amount of apperances for UD Las Palmas with 454 games to his name, many of those as captain and it was only a couple of seasons ago he was trying his best to stop Ronaldo and Messi in Spain’s Golden league.

The Rojillos kept on knocking. In the 81st minute Miguel Gómez saw the keeper off his line and from 35 yards tried a powerful chip. The keeper got his hands to the ball but it spilled out and dropped agonizingly wide of the upright though the Rojillos were getting closer.

With three minutes remaining on the clock Ayoze took a short corner giving the ball to Alex Fuentes. The winger curled in a medium height powerful cross to the far post and coming in on the blind side with that huge outstretched leg was Rosmen to fire the ball home from close range and deservedly Lanzarote were level at 1-1. 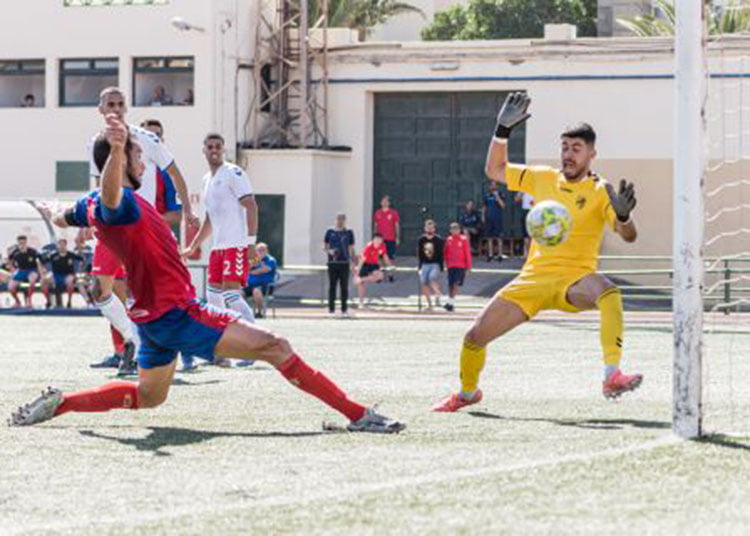 Rosmen once again rescues a point.

The noise level of the fans increased with every pass, tackle and cross urging their side to go for the winner.

Deep into injury time the Rojillos hit the playoff hopefuls on the break. Miguel on the right sent Alex Fuentes through the centre with a precise pass, the 20 year old timed his run to perfection but from 12 yards and with only the keeper to beat he had a rush of blood to his head and completely mishit his shot not even testing the Tamaraceite keeper. 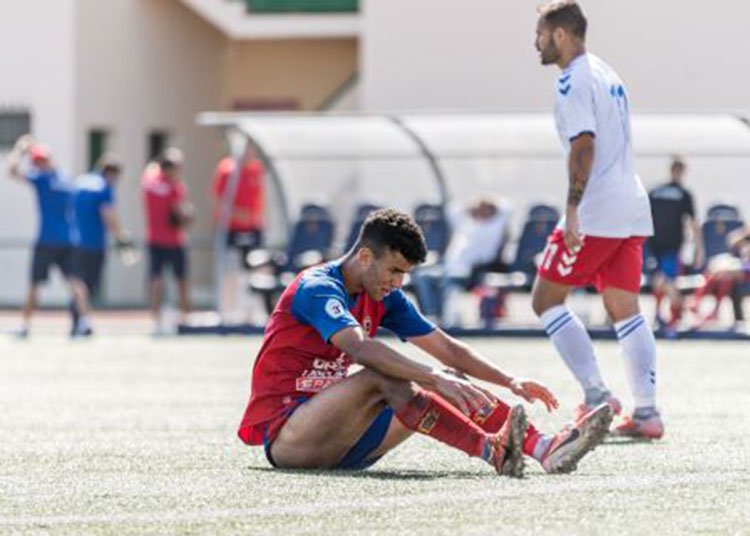 Alex Fuentes so disappointed that he didn’t score the winner which would have capped off a great game for the winger.

Overall this was another super performance in an extremely good game of football played on a spectacular glorious February day in Arrecife. On the final whistle players collapsed in exhaustion whilst fans stood up and applauded both sets of players. 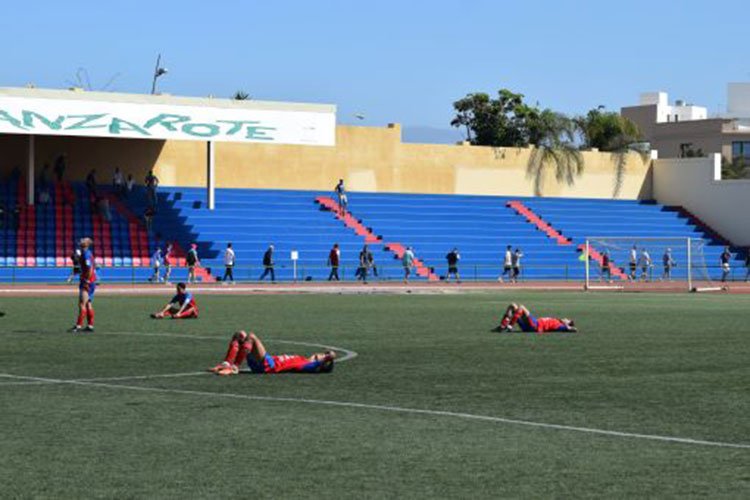 Flat out in the February heat.

The result leaves Lanzarote in 16th spot but they have extended the gap to the relegation positions to four points. Tamaraceite have slipped out of the playoff places and have been replaced by Lanzarote´s opponents next Sunday away in Gran Canaria UD San Fernando. 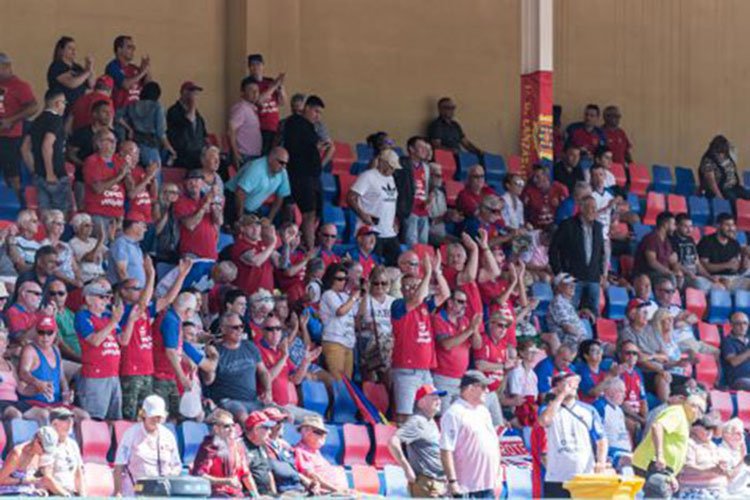 Fans appreciate the effort of both sets of players.

San Fernando is possibly the best team in this league currently and are the only side this season to beat the Rojillos at home. They have also won their last three matches scoring four goals on each occasion.

HOME IN ARRECIFE THIS SUNDAY

HOME THIS SUNDAY AT 12 NOON
Scroll to top