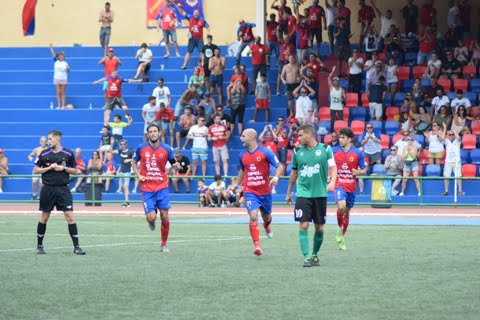 The Rojillos are one of only five teams who remain unbeaten after the opening three matches, however with all of those games being draws they are in 14th place and two points off the playoff positions. 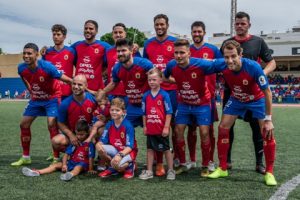 This was always expected to be a tough and entertaining encounter with over a third of the opposition’s starting line up being Lanzarote players last season, that’s not including the La Palma´s side manager Maxi Barrera who left Lanzarote last May after two seasons with the Rojillos. 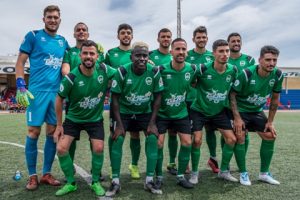 The first chance of the match fell to Lanzarote´s man of the moment Miguel Gómez. He chased what seemed a wasted ball and beat the keeper to it only to see his header go narrowly wide of the right hand post.

The visitors responded in the 13th minute when the menacing striker Malick struck a low effort which was inches away from the left hand post.

There were good chances for both sides, in the 21st minute Miguel Gómez´s powerful strike from the edge of the box whistled over the crossbar whilst five minutes later a good first touch from Atlético´s Juanma allowed him to power in an effort from 12 yards which flew a yard over the crossbar.

In the 33rd minute it was bad news for the Lanzarote faithful as Miguel Gómez hobbled off after getting clattered. It looks as though last season’s player of the season will be about for around three weeks. 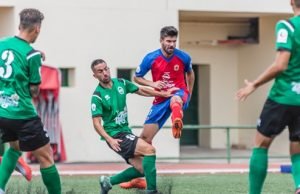 The talent of Miguel Gómez is well known in this league so he is likely to have to take a few knocks.

Only a minute later and the crowd’s minds forgot about this injury as Miguel Gopar supplied a delicious low cross from the right for Ayoze Pérez but uncharacteristically one of the fans most popular players scuffed his effort from the six yard box and saw the ball go agonizingly wide of the left post. 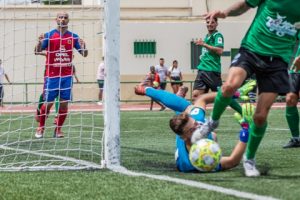 Ayoze Pérez watches in horror as he misses from six yards.

Just before the half time a La Palma player was down with a leg injury whilst Lanzarote had the ball in an attacking area. I believe that the Rojillos kicked the ball out unnecessarily so the player could receive assistance. I do wish players would stop doing this as there are three officials who could stop the play if they deemed the injury worthy. Sorry everybody with that rant i just wanted to get it off my chest.

It only took four minutes into the second period for the game to spring back into life. A dangerous in swinging free kick from midfielder Chema was headed onto the post by a Rojillo defender and it just had to be ex Lanzarote player Alex Yunes who thumped the ball home from five yards to give his new side a 0-1 lead.

On the hour Rosmen who will be 39 years of age next week showed no signs of slowing down as he outpaced the defenders nodded the ball past the keeper and from the by-line he pulled the ball back but there was no one to finish off the move.

Seconds later and a cross from Alex Fuentes found the Lanzarote skipper who headed low from eight yards only to see the La Palma keeper pull off an excellent save at his right hand post to deny the veteran.

As the game progressed so did the intensity of the contest and winger Alex Fuentes was swapping flanks on a regular basis and was causing chaos to both wing backs. 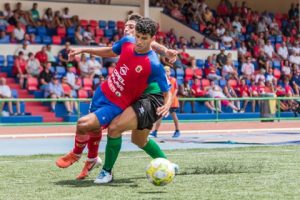 A good start of the season for Alex Fuentes.

In the 68th minute the 20 year old winger beat ex Rojillo defender Javi Morales on the right only to be brought down by Lanzarote´s former player. He was given his second yellow card and his side were reduced to ten men.

The Rojillos kept on knocking at the La Palma defence and even with time wasting tactics from the visitors it did not prevent the tempo of the match from changing.

In the 74th minute great work from Lanzarote right back Camacho and Alex Fuentes who supplied a low cross to the near post, Rosmen cleverly flicked the ball past the keeper and Ayoze Pérez was on hand to tuck the ball home from close range to level at 1-1. 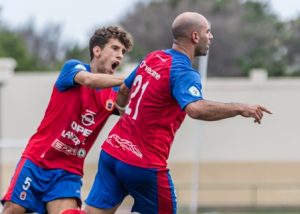 Just a minute after the goal Lanzarote lost their numerical advantage as defender Josito received his second yellow so both teams played on with 10 men apiece.

In the 89th minute the Rojillos were awarded a free kick two yards outside the box. This is Ayoze Pérez´s territory. The vice captain struck his bending effort with the correct height and pace but unfortunately Lanzarote´s final effort was a foot or two away from the target. 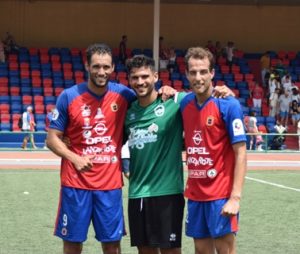 Enemies for 90 minutes then best of mates. Rosmen with Fran Gil and on the right Josito

Next Sunday 15th September Lanzarote travel to Fuerteventura to play CF Unión Puerto. The Puerto Del Rosario side are a point and two places above Lanzarote in 12th spot with their own type of hat trick, a win, a defeat and a draw to date.

The club is hoping to organise a bus (es) to this match. Info will be put on Facebook, Lanzarote football club and on this website as soon as I have details.

ALL ABOARD THE GOOD SHIP UD LANZAROTE TO FUERTEVENTURA, 10th September 2019
Scroll to top