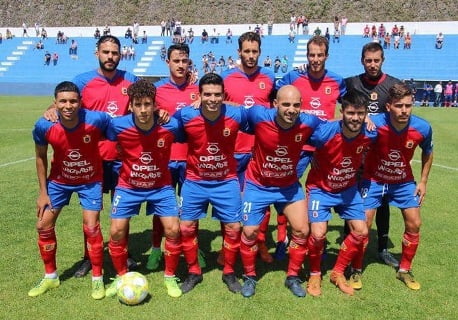 The Rojillos pick up a point in their first away match of the season in a game with very few chances.

The La Palma side narrowly escaped relegation in their final game of last season in a match that sent Yaiza down to Regional Preferente league.

The hosts wanted to guard their defence as in their opening match of the season they were thumped away 5-0 however they were full of confidence having beaten Lanzarote in this fixture last season 1-0.

The home side got off to the better start and after only three minutes a strike from distance by Omar grazed the Lanzarote crossbar.

Ayoze Pérez came closest for the Rojillos but his effort from the edge of the box flew over and at the end of the first half ex Rojillo Javi Melián had a goal disallowed for a foul during the passage of play.

Unfortunately for Lanzarote, winger Miguel Gómez picked up a nasty ankle injury and was replaced by Nico González. It will be touch and go whether Miguel will be fit for the home match this Sunday as his ankle is heavily swollen but it doesn’t appear to be a serious injury.

Tenisca also began the second half the better of the two sides but with both teams worried about defeat it wasn’t till the end of the match that both sides gambled and looked threatening.

Tenisca picked up their first point of the season whilst Lanzarote earned their second draw.

Next Sunday 8th September at 12.30pm Lanzarote will host CD Atlético Paso. This will be an interesting encounter because Lanzarote´s manager last season Maxi Barrera is now in charge of the newly promoted side. It is not just this that makes it interesting but Maxi managed to entice four Lanzarote players who played under him last season.

CD Atlético Paso´s first game of the season was postponed on the opening day because of intense heat but last Sunday they won 3-0 at home against fellow new boys UD Gran Tarajal.