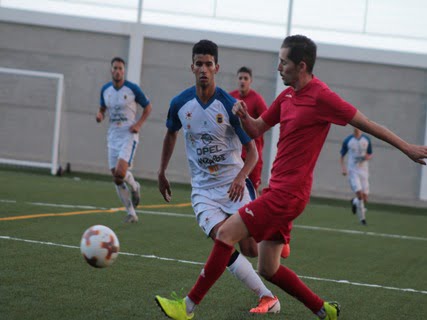 The Rojillos cruised to a 0-4 win in their first pre season fixture in a surprisingly entertaining opening match.

Lanzarote went 0-1 in front when Rosmen unselfishly squared the ball from the right wing and Alex Cruz stroked the ball home to give his side a 0-1 half time lead.

Manager Jero Santana made ten changes in the second half with only Josito remaining.

Ayoze Pérez looked as commanding as ever and on the hour mark he supplied the cross for the new Las Palmas defender Omar to blast home from eight yards for 0-2.

In the 66th minute Miguel Gómez did what he does best, take on a defender and from 20 yards blasted the ball low into the bottom right corner giving the Rojillos a 0-3 advantage. 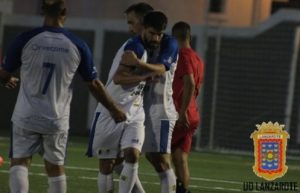 Miguel Gómez starting this season as he ended the last.

As the match came to an end Toñito was put through the middle and chipped the keeper to beat the Regional side 0-4.

Usually the opening pre season matches are subdued but this was very upbeat with fitness levels of the Lanzarote players looking very good.

In the first half last season’s junior player Aythami shone with his alertness and incredible pace whilst in the second half veteran Toñito rolled back the years showing the quality that he possesses.

It was a shock for me to see the 34 year old at the first pre season training session as he left the club for Yaiza a couple of seasons ago and early on suffered a cruciate ligament injury missing the rest of the season.

He then signed for Haria and Altavista and it seemed to me he was fading away as one of Lanzarote´s past yet extremely good footballers.

During the pre season he has shown fitness and attitude and now there would be no surprise if he were to be offered a contract.

Lanzarote´s next pre season match is versus CD Tahiche this Friday 2nd August at 7.30pm at the stadium up the road from me in Tahiche. Entrance is free.