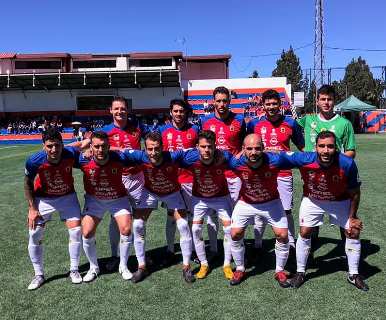 The Rojillos remain in third spot following a six goal thriller in Gran Canaria with five games to play. 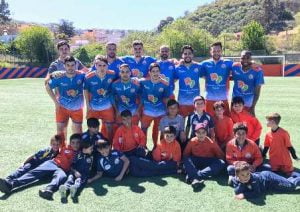 Last season this match ended in a 4-5 win for Lanzarote and the Rojillo fans that made the journey over to support their club along with the locals got good value for their money. 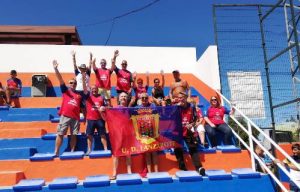 Lanzarote took the lead in the 9th minute when bang in form Nico González let rip from the from the edge of the box and saw his strike fly into the bottom right hand corner and the Rojillos were 0-1 to the good.

In the 15th minute defender Felipe levelled at 1-1 when he headed home from a corner. Ten minutes later the referee ordered a spot kick when striker Samu went down in between two Lanzarote defenders. Felipe stepped up and tucked away his and his team’s second goal to put the Gran Canarian side 2-1 up.

Three minutes into the second half Alex Yunes belted a cracking 20 yard free kick into the top right hand corner and the Rojillos were level at two apiece. 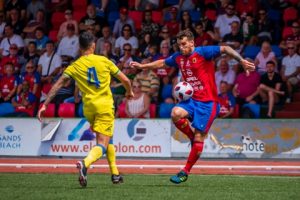 In the 53rd minute Lanzarote midfielder Alberto Escudero then gave his side the lead for the second time in the match when he beat the keeper with a low shot to give his team a 2-3 advantage. 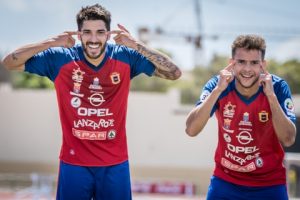 Goalscorers Nico (right) with Alberto. No idea on what they are doing.

The home side then levelled at 3-3 five minutes later. It was another goal of high quality as Sub Nano curled a dipping free kick from 20 yards over the wall and into the top left hand corner.

Both sides went after the win and both hit the woodwork. Lanzarote were the closest to claim all three points as Miguel Gómez´s powerful strike struck the upright and he could only watch in horror as the ball rolled agonizingly along the goal line and away to safety.

Lanzarote may be disappointed not to have taken maximum points but none of the sides around them in contention for the playoffs won.

The local club however are just one point clear of the relegation positions after just picking up two points in their last six matches. There is no doubt that they are in a scrap for survival and many Lanzarote supporters are lending their support to help them avoid the drop.

UD Lanzarote´s goal is promotion to Segunda B (Third Tier) but it will also be very useful to have an island team playing in this league to keep the standard of football high so if you get the chance go and support Yaiza.

This Friday 19th April at 12.30 Lanzarote are at home against mid table Tenerife side Atlético Unión de Guímar. To come and watch this or any Lanzarote match you simply pay at the gate.