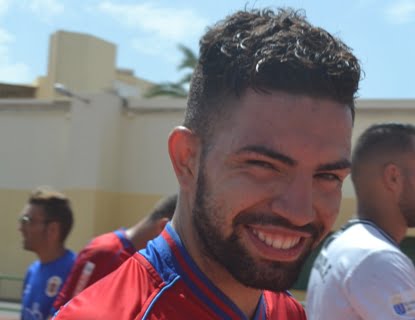 Ten men Lanzarote come back from 1-3 down at half time and go within whiskers of taking all three points in a day that manager Adolfo Pérez´s men made history going 34 home matches unbeaten.

Even with this superb fight back the Rojillos have now drawn their last four matches. As fortune would have it none of their closest rivals picked up maximum points so Lanzarote remain three points clear at the top.

The first opportunity came in the 6th minute when Rojillos striker Mauri burst down the left flank, his cross found Toñito on the right but the wingers strike went narrowly past the far post.

Other than that Lanzarote were a little stagnant in the opening stages and were made to pay in the 12th minute. A corner was poorly dealt with by the Rojillos defence and striker Johny nodded the ball home from close range to give the Tenerife side a 0-1 advantage.

This brought Lanzarote immediately into life and just 60 seconds later left back Miguel Gómez powered in a drive beating the keeper with utter power at his near post from 12 yards to level the score at 1-1.

The hosts now had the grit between their teeth but the visitors were more than willing to play their part in what was becoming a great football match. Unfortunately the Ref failed to let play continue with some challenges and started brandishing yellow cards and Lanzarote´s discipline began to slide from being infuriated with the official.

In the 29th minute striker Rosmen picked the ball up in midfield, rode a couple of challenges  and played a one two with Mauri and then from eight yards he forced the Tenerife keeper into a good save. Fine play from the Lanzarote skipper.

Lanzarote were now on top and in the 32nd minute Toñito fed Vladi on the edge of the box but the Lanzarote midfielder had to stretch to strike the ball which meant his effort lacked venom and the keeper made a comfortable save.

Five minutes later and Mauri struck from the edge of the box but his shot was blocked, Louis Kennedy sweetly struck the rebound but his effort went inches past the right hand post.

Now came a sensational five minutes of football. A long kick from Carlos the Tenerife keeper was not picked up by the Lanzarote defence and the tall and talented Tenerife striker Oscar nipped in tucking the ball past an embarrassed Lanzarote goalkeeper to give his side a 1-2 lead.

Four minutes later and Lanzarote´s defence lost possession in their own third which forced defender Fran Gil into a rash tackle which clearly upended goal scorer Oscar. The Ref finally got a decision correct awarding a penalty to the visitors.

Oscar dusted himself off and sent keeper Agoney the wrong way to give his side a two goal advantage with the score 1-3. If Lanzarote thought that things could not get worse then they were completely wrong. Just a minute after conceding their third defender Miguel Gómez was sent off after arguing with the visitor’s players on the bench.

The Rojillos adjusted and managed to get to half time without inflicting more damage.

Whatever the Rojillos manager said to his players at half time worked a treat as his side came out with sheer determination in their eyes and were winning most tackles and enjoying the majority of possession.

Fran Gil and Louis Kennedy had to make way for Ángel Gil and Marcos Cabrera during the half time reshuffle. It was the latter who supplied the cross just two minutes into the restart that found the head of midfielder Javi Betancort who nodded the ball home to make the score 2-3.

This gave Lanzarote the momentum and even with a player less the Tenerife side was forced to retreat.

In the 54th minute a corner was cleared by the Vera defence but the bounce of the ball was well read by Mauri, the Colombian controlled with his chest and from the edge of the box fired low into the bottom left corner levelling the match and sending the home fans wild.

The Lanzarote centre forward and man of the match has been in great form all season but has only just been rewarded with a few goals of late enjoyed his moment jumping into the crowd.

Victory was clearly in sight and in the 58th minute the ball fell to Rosmen and with the keeper off his line he struck from 35 yards only to see the keeper back pedal and finger tip the ball over the bar for a corner.

Ten minutes later and the Tenerife keeper who was having a great match denied Javi Betancort from an overhead kick palming the ball just wide of the post. From the resulting low corner Javi again beat everyone to the ball but his shot went inches past the near post.

Lanzarote were winning every 50/50 ball and with midfielder Vladi in sparkling form he seemed to be winning challenges that he had no right to. This enthusiasm rubbed off with the crowd and made it a fantastic atmosphere albeit with a smaller following than normal due to the day change.

Inevitably Lanzarote began to tire and the visitors came close in the 85th minute after a quick throw that led to striker Johny to have a free shot at goal, fortunately for the Rojillos, Agoney produced a fine save to keep his side in the match.

Deep into stoppage time Mauri was put through the middle but once again the Tenerife keeper proved his worth and read the situation early and cleared the danger to earn his side a point.

Second placed Tenisca drew 1-1 away to second from bottom UD Cruz Santa and remain three points adrift of Lanzarote whilst Las Palmas B drew away to Telde by the same score though Viila Santa Brígida nipped into fourth spot with a 1-0 win and are a point behind the two teams above them.

Next Sunday Lanzarote are away and will face mid table Tenerife B.