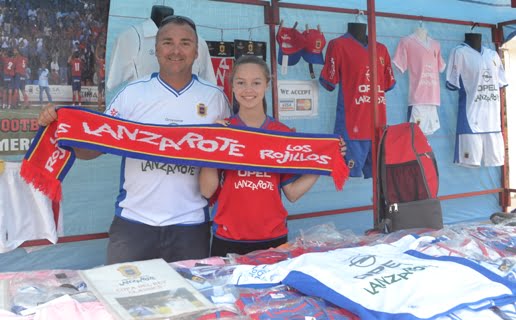 Despite losing on penalties in the play offs Lanzarote have had a great season finishing runners up in the Tercera Divison (Fourth Tier). After many experienced players left the club last season manager Adolfo Pérez brought in a mixture of youth who gelled not only on the park but also as a team with their more senior players.

The signs look good for next season with players showing that they wish to carry on the progress and hopefully this can only attract a couple of other good quality players.

Home form was nothing short of brilliant with Lanzarote being the only side in the league to remain unbeaten for the whole season; in fact the Rojillos (The Reds) haven’t suffered a defeat on home turf for more than a year. The players, management and club directors know that the support the club receives from the tourists who flock to the matches as well as the great local expat support has helped the Rojillos to achieve this.

The fans player of the year was the clubs leading goal scorer and captain Rosmen. Second placed was winger Toñito whilst British boys Louis Kennedy and Brad Cockerill were 3rd and 4th respectively. Goalkeeper Agoney was fifth.

As seen on the front photo, my daughter Jessica and I will be there to greet you at the clubs stall over the summer every Sunday at the Teguise market and also every Friday at the Puerto Del Carmen market in the Old Town, both from around 10am to 2pm. We will be selling all three of the clubs shirts as well as all other merchandise such as shorts, scarves, caps, balls etc. (Check out club shop on home page for products)

Season tickets as always are never released till around early August and expected to remain at 50 Euros adults, 30 Euros Pensioners whilst children 15 and under are admitted as usual free of charge.

Around that time the popular San Ginés tournament will take place. Quite often Las Palmas enter in this four team event  though we doubt that they will be participating in August as they have just won the golden ticket and have now been promoted to the Primera Liga.

Congratulations to our big cousins from across the sea. After losing their first leg in the final away at Zaragoza 3-1 they went 1-0 up at home in the first half and four minutes from time belted in the all important second goal to go through on away goals. A magnificent achievement for a club that almost went into financial meltdown just a few seasons ago.

There is no doubt they will struggle against the Messi´s and Ronaldo´s of this world but one would hope they will have a lot of fun doing so in the coming season. Ten years ago Lanzarote were drawn a home tie in a Copa Del Rey match versus Primera Liga side Sevilla. The Primera Liga side exercised their right not to play on our astro turf so Lanzarote were forced to play the match away in Las Palmas.

Thousands of Las Palmas supporters came and supported Lanzarote and helped to create an electric atmosphere with the Rojillos coming so close but eventually went down 1-0 and relations between the two clubs have always been great.  Keep an eye out for them and an occasional prayer might help.

Expected weather forecast for this summer is hot, hot and damn hot so be careful in the midday sun.

This website is unlikely to be updated until early August so for up to date information log onto the Facebook page Lanzarote football club or email at info@mercancialanzarote.com.

Have a great summer

Condolences to Brad, Ian and all their family.