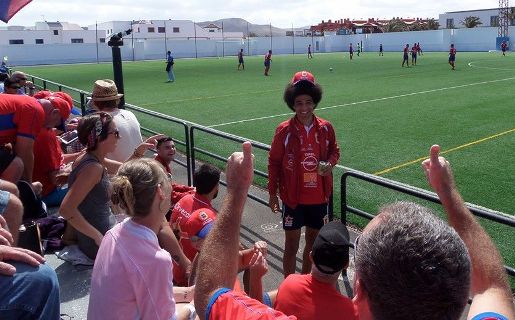 Both teams very much wanted the win in Gran Canaria. Lanzarote to keep the pressure on the league leaders and Santa Brígida to keep alive their hopes of a playoff finish.

Lanzarote dominated most of the first half with winger Toñito striking the woodwork in the early stages and striker Rosmen failing to hit the target when he found himself unmarked inside the area.

The opening stages of the second period were controlled by the home side with striker Futre and defender Alex both forcing the Lanzarote keeper Agoney to make good saves.

As the game hung in the balance both sides had good chances to win this match with Futre again testing the Lanzarote keeper and Rojillos midfielder Marcos Cabrera coming close with a free kick.

The game ended in a draw as it did in Lanzarote earlier in the season though back then the two teams shared eight goals in a monumental match.

Lanzarote are in third position but are just goal difference away from second spot held by Tenerife side CD Marino with league leaders from La Palma riding high five points clear with just four matches remaining. Meanwhile Villa Santa Brígida all but ended their hopes of Segunda B (League 1) football by now finding themselves adrift of the playoffs by a huge six points and four teams.

Lanzarote are at home this Sunday 26th April at 12 noon versus a side desperate for points. Gran Canarian side CF Arucas are in sixth position just two points from the playoffs. (Just the top four are in the playoffs)