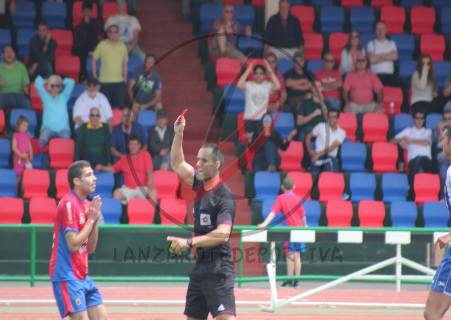 Rojillos manager Adolfo Pérez openely admits that this was his side’s worst home performance of the season. Nevertheless with the two top sides both losing Lanzarote have narrowed the gap to league leaders CD Mensajero to just three points.

It does seem that neither of the top three sides want to win the league championship and gain entry to the Copa Del Rey (F.A. Cup) for next season. Incredibly the leagues bottom club CD La Laguna has taken four points off the top two sides in the last fortnight.

There is no doubt that the Conejeros (locals) should have won this match against the 4th placed Gran Canarian side especially as the visitors were reduced to 10 men in just the second minute following a head butt by striker Victor on defender Falo.

If anything the sending off of the Real Sporting player spoiled the game as the visitors played with their 10 men behind the ball and Lanzarote were not creative enough to find a way through.

In the 17th minute Toñito sent Louis Kennedy away but the British lad took a touch when in hindsight he should have hit the ball first time. On taking a touch this enabled the Gran Canarian keeper that extra second to narrow the angle and smother the winger’s effort.

The home side didn’t seem to use their wingers enough as all the action went through the middle of the pitch. As the weather got warmer it would have been wise to make their opposition chase the ball a little more.

In the 26th minute Echedey hit a superb strike from the edge of the box but having beaten the keeper the Rojillos midfielder saw his effort fly off the post and away for a goal kick.

The Gran Canarian side shut up shop for the remainder of the half as Lanzarote found it difficult to untie their stubborn defence.

The Rojillos manager Adolfo Pérez made two good substitutions at the beginning of the second half bringing on wingback Ángel Gil and striker Yaco. Whilst the improvement of play was noticeable it still wasn’t enough to break down the well organised defence of the visitors.

In what was a dull match the 67th minute contained the majority of the action. A great cross from the right from Ángel Gil was met with a powerful header by Kennedy but the goalkeeper quickly altered his footing and produced an excellent save. The loose ball fell to Toñito who then turned a defender and seemed to have been brought down but to the home supporters horror a penalty was not given. Echedey argued with the Ref and in doing so was shown his second yellow which evened up the sides numerically.

The visitors now gained confidence and in a rare opportunity 15 minutes from time Lanzarote goalkeeper Agoney had to produce a good save from midfielder Alejandro González.

The Gran Canarian side were extremely content with this draw and they are the only side that have prevented Lanzarote from scoring at home this season. The Rojillos still maintain their unbeaten home form though will be kicking themselves by not putting the pressure on the two sides above them.

The Rojillos are away next Sunday against CD El Cotillo in Fuerteventura. Whilst this is an away match Lanzarote will have some support as a  double decker bus will be carrying the players and some fans to the port in Playa Blanca where they will jump on the ferry for the 20 minute crossing to Fuerteventura.

There are still places available. The trip includes bus down to Playa Blanca, ferry crossing, lunch with the team after the match and then reverse home. The cost is 45 Euros as long as you have a Certificado de Viajes which is obtained at the Ayuntamiento (Town Hall). If you don’t have the Certificado the price is 71 Euros. If you want to come for this fab day out give me a call (Ian) 0034 649963943.